I got the recipe from Mel’s Kitchen Cafe. Her cooking is always right up my alley. This recipe is now in my tried and true file under shockingly simple. I love it when I find a recipe that is just too easy, yet so delicious. My whole family gave this one a thumbs up.
Now, I did do three things different than the original recipe. First, my family loves provolone, so I used that instead of mozzarella. Second, I only used one pepper total.  Lastly, I pan fried my peppers and onions on the stove in a little butter. Only my oldest son and I are the only ones who will eat the peppers and onions.  That’s why I reduced it to one pepper. Also, by cooking the peppers and onions separately, those that want them can put them on their sandwich.  Those that don’t, can leave them off.  Absolutely delicious! I originally made the sandwiches on homemade hot dog buns, but store bought buns work well and is what I used in the photo. 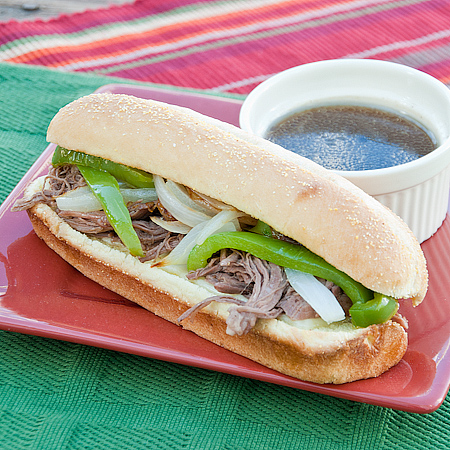 […] roast beef sitting in my fridge from the other night when I made the recipe I have on here for french dip sandwiches. This sounded like the perfect way to use my leftovers. I also had some leftover cooked red pepper […]

[…] have a yummy look back for you today at a recipe for french dip sandwiches. They have received the added title of “Shockingly Simple” because you will be amazed […]

[…] dip sandwich also know as the French dip.  I have shared other versions before including the Shockingly Simple French Dip Sandwiches and Slow Cooker Italian Roast Beef.  So you may wonder why another recipe.  Well, they may all be […]

Laura, I just have to tell you that you are so sweet – your comment on my blog recently made my day. Thanks for enjoying the recipes I post! Hopefully I won’t disappoint you! I’m really impressed you made homemade hot dog buns – I’m going to have to try those for sure. And I’ve been looking for a good potato salad recipe so I’ll have to try that, too. Thanks!