I found this recipe on Blogging, It’s what’s for dinner. It was posted by Janette who got the recipe from Jessica Seinfeld’s book Deceptively Delicious. Now the idea is to not have it taste like pumpkin. This recipe is used to sneak in good things for your kids without them knowing it. My oldest son was gone for this meal, but my 8 year old son and 4 year old daughter thought is was just regular old french toast. I have to tell that I actually even used 1/4 cup pumpkin. My hubby was not fooled at all. He asked me right off if it was pumpkin. The only thing that gave him the clue was the orange color to this french toast. I also used Texas toast for this recipe. It was yummy. 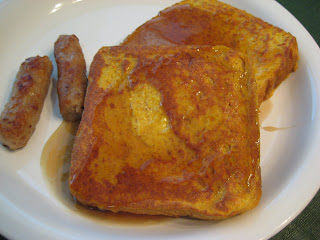 I linked this entry on my blog, and told people to visit your site. It’s delish! You’ve become a new favorite!