Now this recipe is really simple, but you wouldn’t believe how long it took me to figure it out. I absolutely love fluffy honey butter. The thing is, over the years I tried several different recipes. Some called for the addition of vanilla or egg. None of the recipes ever tasted or looked like what I was trying to make. Then a while ago, I saw another recipe from somewhere and gave it a try.

It was perfect, exactly what I was looking for. The secret to yummy fluffy honey butter is that you have to whip the butter, make it all fluffy before you add the honey. I have also done the same thing but used seedless raspberry jam in place of the honey to make raspberry butter. You could do the same thing with any flavor of jam. I just can’t remember if I use the exact amount on the jam as the butter. So, if you want to give it a try start out with 1/4 cup and just and more if it needs it.

Today, I was also hoping that you guys could help me out. Recently, I was on someones blog and saw a recipe that I wanted. I thought I had book marked it and apparently I didn’t. I have no idea who’s blog it was. The recipe was for Double Candy Brownies. They were brownies made in muffin tins with a miniature Hershey bar added to each brownie and then topped with crushed Butterfingers. If anyone know the blog it was on could you please post it in the comments for today’s post. I even googled the recipe and still can’t find it. Thanks. 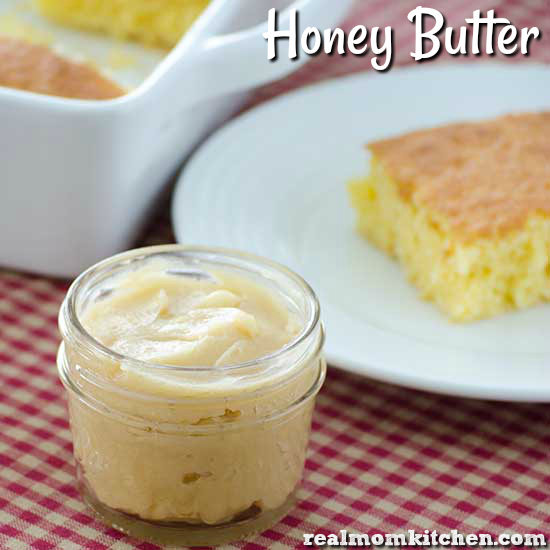 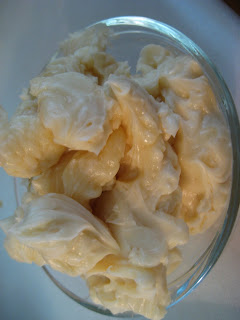 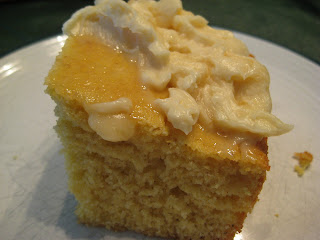 These are the original photos from this post. The above photo was added in January 2018.
10 comments
0
FacebookTwitterPinterestEmail

[…] your guests whether they prefer cakey or corny cornbread.  It is also excellent served with honey butter!  I highly recommend you make […]

Thanks so much for this recipe! I first tried honey butter at a farmers market on a visit to salt lake city and can’t find it anywhere near my home base of san diego. Im so excited to try this at home! Thank you!!

I never thought to whip the butter. Thanks so much for the great tip. I can’t wait to try it.

Thanks for the honey butter recipe. I love honey butter especially with lion house dinner rolls, which I noticed you have on your blog. I am going to check out your tips, because your rolls look exactly like the lion house ones. I have never been able to get mine to look like theirs. Now that the cooler weather is here I am going to start making rolls again. Your honey butter looks great!

ohhh yummy, I havent had honey butter in ages,, now Im craving a scone with honey butter hehe, thanks for the recipe, now off to find a recipe for scones..Utah type scones. You know the fried ones YUMM< Carm

I made the pumpkin patch pancakes and apple cider syrup today for breakfast. mmmm!! They were so good! I only made half of the recipe for the syrup and I still have tons of it left! It’s really yummy though! I’m going to be making the white chili tonight and cornbread with this yummy honey butter! I only have creamed honey, so hopefully that will work for me. Sounds yummy!! Thanks for the great recipes!

I love honey butter as well. I think that raspberry butter sounds fantastic too. I’ll have to give that a try – I’m usually more likely to have jam around than honey, because of the price.