Happy New Year everyone! There’s always something refreshing about starting something new. I am excited to start off this new year. This crock pot potato chowder recipe is a great one to start the year with. It comes from a new blog I found called $5 Dinners. She set out his last year to spend only $300 a month in groceries and diapers.

For this year, she just won a year worth of groceries from Walmart. So she is hoping to spend only $50-$60 a month on groceries. She still is thinking she’ll need to spend some money because she has children with food allergies. As a result, she doesn’t think she’ll be able to get everything she need at Walmart.

This recipe she had on her site is an adaptation of a recipe from Recipezaar.

I have never been able to find a cream soup that you make in the crock pot. So I decided to give it a try. It turned out great, everyone ate it up. The crock pot made this very convenient. However, I do have to admit I still prefer the soup make the good old fashioned way with a roux. But this recipe will still probably come in handy on occasion.

I left the prices on the recipe that were included at $5 Dinners. Now, I think my ingredient cost were very similar. I do know that the cost for my potatoes was closer to 50 cents. My cream cheese was 69 cents. When I first made this, I didn’t have any green onion to top these off with. I couldn’t resist to not add a little shredded cheddar cheese. I also served it in the bread bowl recipe I have posted on here. 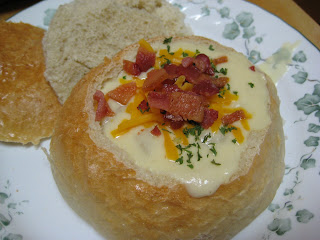 This photo is the original from this post. The above photo was updated in March 2015.

[…] is similar to a recipe I posted years ago for a crock pot potato chowder.  I actually posted it on January 1 of 2009.  The main difference with this recipe is you use […]

[…] with a delicious Cheesy Potato Soup that is made in a slow cooker.  A while back, I posted another version that got it’s creaminess from some cream cheese.  It is very rare that you can find a […]

I just wanted to let you know that we LOVED your recipe!!!!! I started out looking for a creamy chicken noodle soup, and came acroos your blog. I then kinda got distracted (don’t tell anyone) and found myself looking at this recipe, forgetting that I had chicken breasts in the frig that HAD to be used. So, I got to thinking, and I read a few reviews, and decided to use your recipe and add the chicken. I also put in a few chopped carrots and celery. It turned out WONDERFUL!!!!!! The whole family loved it!. Thank you for sharing your recipes with the rest of us. I now have you saved into favorties and will definetly be looking back to check for more recipes!
Thanks!

Do you know if this would freeze ok? It sounds great, and would love to be able to make it and stick in freezer for later.

I made this a few days ago with the Italian bread bowls..yum! I love that I had so much leftover..a quick warm lunch! Thanks so much!

I trued this the other night and it was great. Thank you for sharing!

I just made this up today along with your recipe for bread bowls, it came out great! I think I maybe added too much water or something to the crock pot though. I wound up adding some cornstarch and an extra can of the condensed soup. I also had a few baby carrots and some celery so I threw that in too, which maybe threw off the water content. But it came out so good! Thanks so much for posting this recipe and the bread bowl one. It was my first time working with a kneading-type bread I feel so accomplished!

I’m a sucker for all things crock pot. I am definitely going to try this potato chowder.

That looks so delicious! I need to check that blog out, it sounds right up my alley. 🙂