So when I was planning out Super Bowl week, I got the idea to make some sliders. I then decided to take my favorite wings and turn them into slider form.  I have never been big on the whole wing thing, but love the “boneless wings” at Wingers Bar and Grill. There these wings are known as “Sticky Fingers“. I have shared a recipe before for a homemade version, but thought a slider would be fun.
So from that idea, I settle on a shredded chicken slider made with my homemade version of Winger’s wing sauce.  The sticky fingers are also served with ranch dressing and celery. So I decided to include a slaw made with those two ingredients. By all means if your prefer blue cheese dressing, feel free to use that instead!
I also toasted the rolls.  It kept the rolls from getting soggy and also added an extra “crunch” factor to the sandwich!  I used the split top potato rolls from Walmart and thought they worked perfectly!
Now Winger’s sauce it quite sweet.  If you don’t want it as sweet, just begin with half the amount of sugar and then adjust accordingly to fit the level you desire.
I must say, I was very pleased with how they turned out. My oldest son said I nailed it on getting the flavors into a sandwich and told me they were “fabulous”! 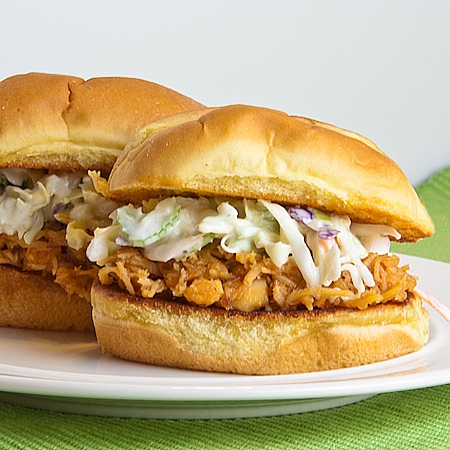 I was wondering can you used the Red Hot sauce or does it need to just be hot sauce?

[…] After gorging ourselves on inari, we decided to eat more.  Yesterday, I made chicken for Buffalo Chicken Sliders!! […]

These are awesome!! I made them last night for dinner and my husband and I loved them. I’ll definitely make them again!

[…] captured them  on film. But, as always, I would like to share the recipe with you. You can find it here. I also added some red pepper flakes, a few dashes of tabasco and some spicy chicken seasoning […]

[…] to the SBSunday “to do” list…I made some Buffalo Chicken Sliders (recipe found on Pinterest, thank you very much).  I then realized the kitchen needed a good […]

Am bringing these to the neighborhood Super Bowl party – they are delicious! My only question – is 1 and 1/2 cups of brown sugar a typo? The sauce was really sweet, I added more Frank’s Hot Sauce and all is well now. Going to offer some blue cheese crumbles on the side. Thanks for the inspiration!

I am in the middle of making these for the neighborhood Super Bowl party, is 1 1/2 cups of sugar a typo? The sauce is so sweet – I added more Frank’s to counterbalance and it is good now. Can’t wait to serve them. I’m going to offer some blue cheese crumbles on the side. Thanks for the recipe!

LOVE these recipes as my crock pot does most of the work 🙂 We tailgate A LOT so these would be perfect to make in our motor home too! Thanks for sharing!

This sounds delicious. I love the added bonus of the cool and creamy slaw on top.
Kristin

This sounds delicious. I love the added bonus of the cool and creamy slaw on top.
Kristin