I love root beer floats! At our house, we are particular about our root beer. From the time my daughter was small, she referred to our root beer of choice as “dog root beer” otherwise known as Mug Root Beer. If you are unfamiliar with Mug Root Beer, it has a bull dog as part of it’s logo.

Since I love the flavor of root beer floats, I thought a frozen root beer float pie would be equally as tasty and it was. It may look a little strange while you are making it, but the results are fabulous. It is chilly, creamy, and full of root beer flavor. 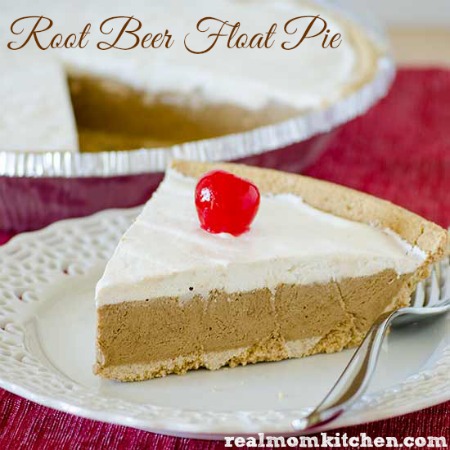 Recipe adapted from Spend with Pennies.

I love the sound f the recipe. I will save It and try it as son as I can get my root beer. I love mug root beer but where we live in New Mexico they have a old fashioned brand that is made like it was in the old days and if you want to get real old fashioned they have a sarsaparilla that is out of this world. The problem with this is that we only buy it occasionally because it is expensive. $1 a bottle. or $6 for a 6 pack but this recipe would sure call for it. I love root beer floats and this will be fantastic.