Yesterday, I was in the mood for pumpkin chocolate chip (or cinnamon chip) cookies. I went to my files and got the only recipe I’ve ever made since I’ve been married. Shortly after getting married, my husband wanted pumpkin chocolate chip cookies, so he asked his mom for her recipe. That is the only recipe I’ve ever made since then. I’ve had no reason to do otherwise.

My daughter was allergic to chocolate, so when I made these I would usually leave some dough plain and make her plain pumpkin cookies. One day, I had some cinnamon chips in the house. So, I decided to add cinnamon chips to some of the dough for her. They turned out fabulous.

Now, I still prefer good old chocolate chips of course, but the cinnamon chips are a nice tasty change from the norm. I think if you use cinnamon chips, walnuts or pecans would also be a nice addition to this cookie. 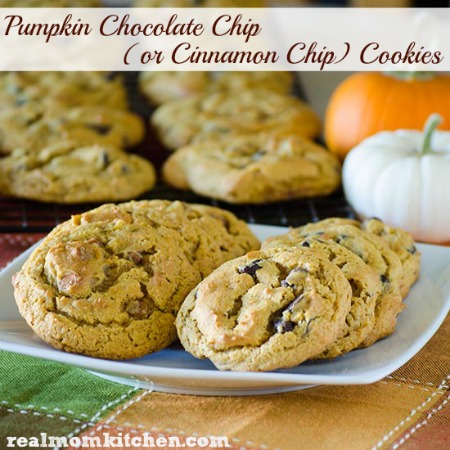 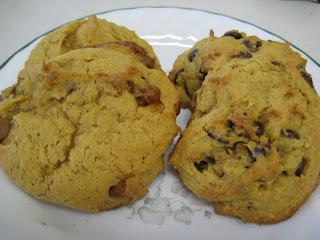 This is the original photo from this Pumpkin Chocolate Chip (or Cinnamon Chip) Cookies post. The above photo was updated in November 2014.

I have been searching for the perfect pumpkin chocolate chip cookie for a long time and tada! I made your cookies and they were a hit with everyone! Thanks for sharing.

great alternative to chocolate chip cookies this time of year. Love to stick them in my kids lunches or give them as snacks after school.

I didn't try it with the cinnamon chips. I couldn't steer myself away from chocolate!

i made these this past friday and we all loved them. i did sub butter for the shortening and had to use pumpkin pie spice since i didn’t have nutmeg. i used the choc chips too. thank you for the delicious recipe!

Those look so yummy! I just discovered cinnamon chips and thought I’d been the first to find them :-)—only to find out they’ve been around for a long time and I’ve just been in the dark. I LOVE pumpkin chocolate chip cookies and so I’ll definitely have to try these with the cinnamon chips in them.

Those look great! I never would have thought of the cinnamon chips, but it makes sense and sounds delicious!

Thanks for the feedback 😉 Definitely going on next weeks list!

Shanna – The cinnamon chips are just like chocolate chips. They are found on the choco chip isle. I buy the hershey brand. They are sweet cinnamon.

Yummy!! Anything pumpkin and I am so there!! 🙂

These sound amazing! I’ve never heard of cinnamon chips though…I’ll have to hunt around for them – are they like hot cinnamon or sweet cinnamon? And are they shaped like candy or like chocolate chips?

Those are tasty-looking cookies. I love the idea of using cinnamon chips.