Years ago, I got a recipe for French Breakfast Puffs from a Quick Cooking magazine (now called Simple and Delicious). These sweet little puffs taste very similar to a cake donut coated in cinnamon sugar. So tender and tasty. My family has loved them over the years.

Then in 2008, I saw that my friend  Tina over at Mommy’s Kitchen had a similar recipe listed on her blog. She got from the Pioneer Woman who calls them Donut Muffins. In Tina’s comments about the Donut Muffins, she mention maybe trying a pumpkin version of the recipe.

Well, at that time, I decided to give it a try with my recipe that I had for the French Breakfast Puffs. So, in October of 2008, I converted it to pumpkin breakfast puffs. The recipe turned out great. So, I shared it on my blog.

I have since increased the amount of pumpkin spice in these pumpkin breakfast puffs to 1 teaspoon and the pumpkin to 3/4 cup. Also, I do think it would be yummy to try a powdered sugar glaze to coat these babies in, instead of the cinnamon sugar. 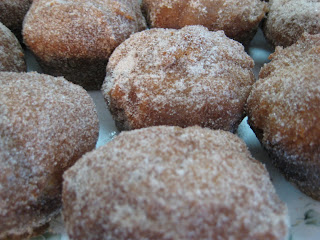 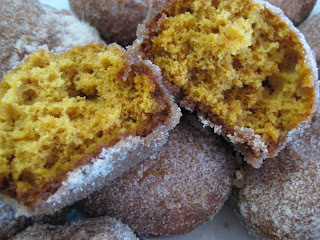 These are the original photos for this post when it was first posted in October 2008.

These were really good. We make the regular french breakfast puffs occasionally but liked the pumpkin version better. Used 1 tsp. of pumpkin pie spice, could have upped it a bit.

Those look really good! Maybe you could do cinnamon and powdered sugar on the outside – yum!