I have always wondered where the hummingbird cake got it’s name from. I always kind of assumed it was because it was sweet with bananas and pineapple and you usually fill a hummingbird feeder with sugar water. Boy was I wrong.

The recipe has said to have originated in Jamaica and it is named after its national bird, which is a type of hummingbird. Then in 1979 Jamaica exported the recipe in a media press kit sent to the US. The first US publication of the recipe was found in Southern Living at the same time. In 1990, it was selected as Southern Living’s favorite recipe and was noted as the most requested recipe in the magazine’s history. However, it is still in question as to where it really came from.

The original cake is said to have had no frosting and included undrained crushed pineapple and diced bananas. However, there is discussion later the it included nuts, mashed bananas, and cream cheese. So it’s all unclear for sure of the origin of the recipe and what is exactly was, but it definitely included bananas and pineapple.

This hummingbird bundt cake is moist and flavorful but the frosting is what makes it truly amazing. Not only is it a cream cheese frosting but it also has a nice fresh citrus flavor from orange zest and juice! 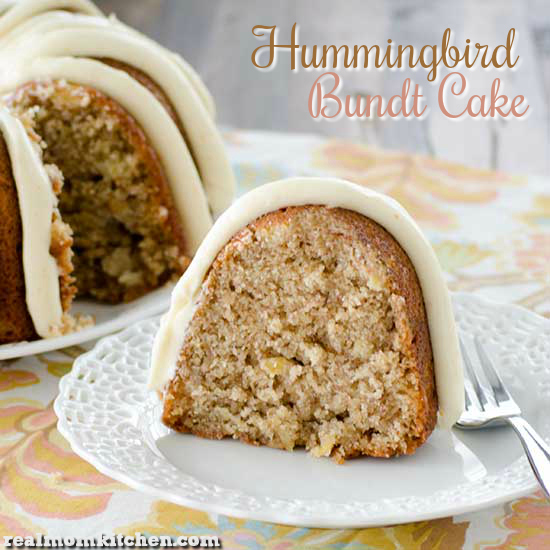 Recipe adapted from Mom On Time Out.

Red Velvet Cupcakes and other sweet treats for...