I love beef stroganoff. Unfortunately, every recipe I have tried never got the thumbs up from my husband. He is actually quite picky about meat. If the meat is at all chewy, he does not like it. So I have been on a quest to find the perfect stroganoff recipe that my husband would applaud. Well, that quest was completed today with this recipe for The Ultimate Beef Stroganoff.

I was visiting Mel’s Kitchen Café. She had recently posted a tried and true recipe that she had for beef stroganoff.

She described it as “the meat is so tender it practically melts in your mouth and the flavor is fabulous”. With that, I figured it was worth a shot. Now, I didn’t have any stew meat in the house, so I used a pot roast instead. I had one in the freezer, so I let it thaw a little and cut it up into cubes. Then put it in the fridge to allow the meat to completely thaw. I was really hoping this recipe would be a winner since it involves a crockpot. This makes life easier for cooking my Sunday dinner.

Today, I did add a little more thickening than the recipe called for, because I like the gravy to be thick. Or course the mushroom were omitted, since I am the only one who would eat them. I also added a little browning sauce to it when I added the thickening. It turned out delicious.

Everyone was loving it, including my husband. I was talking to him at dinner about a few more adjustments to the recipe for next time. My husband then responded with an adamant “NO”. He told me it was perfect the way I made it. The meat turned out so tender. This is now going to be a tried and true recipe to add to my files. 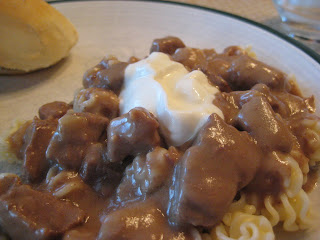 Original Photo from post. Photo Above updated in Feb 2013.

Would like to make it tomorrow, but don’t have the apple juice. Is it that important?

[…] up was stroganoff. Unfortunately, my husband is not a fan. I did finally find the recipe for the ultimate beef stroganoff that my husband would eat. He would however still prefer a hamburger version. I saw this recipe for […]

Hey! We tried your recipe tonight, turned out really good. We used a chuck roast, and that came out really tender. However, next time I think we’re going to try a few tweaks. Neither my son nor I eat mushrooms, so I left them out, but then the flavor wasn’t as the same as a typical stroganoff. Next time, I’m thinking of adding a can of cream of mushroom soup instead of the sour cream. What do you think?

No, add the can of cream of mushroom soup and the sour cream. Yummy

I love this recipe, I have made it twice now and it is delicious. I am looking for a good recipe for hungarian goolash if you have one.

Have you tried this since with stew meat? I am also picky about the texture of meat. I often cook roast beef in the slow cooker so I am not surprise that the texture was good with it. But the real test is if it works with other cuts. Thanks.

Thanks for commenting! I’m so glad you made the stroganoff and liked it (or more importantly that your husband liked it!). And I’m glad the breadsticks turned out ok for you – I like some of the changes you made to them like dipping them in butter first. I am bookmarking your blog – I have a feeling I will love some of your own tried-and-true recipes. Can’t wait!