The other day when I made the pork skewers recipe, I made it from half of a large pork loin I had in my freezer. I needed something to do with the other half. I wanted to do something in the slow cooker and went to search the web for a recipe. Then, I found one for slow cooker pork tacos on one of my favorite sites, tasteofhome.com.

The recipe said that it came from their healthy cooking magazine called Light and Tasty. The recipe called for items that I had in my home with the exception of the dried apricots. I found it to be an interesting ingredient for a pork taco.

So, I was heading out to the store that day and decided to pick some up.

I figured it would add some sweetness to the dish. Now, I must say this meat turned out beautiful. It was quite colorful. The apricots turned a yellow color which added to the red from the pepper and green from the salsa. It was very colorful.

It was also delicious. I now have another great Mexican crock pot dish to add to my collection. The apricots added a nice element of sweetness to the whole thing. This dish is also quite healthy. Before adding your toppings, this dish is calculated to have 301 calories per taco. You could reduce those calories even more if you chose a healthier tortilla. This just called for you traditional white flour tortilla. I used corn but it would also be great with a whole wheat tortilla. 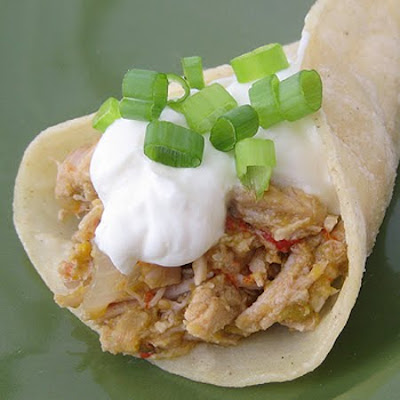 This is the original photo from this post. The above photo was updated in Jan. 2016.

Those look good! I like the sound of using the dried apricots in it.

This looks amazing!!! Thanks for sharing!

Looks delish! I will have to give it a try! Enjoy your blog.

I love the apricots in this! Pulled pork is a regular in our home, these look great!

I was just wondering the same thing about where to get dried apricots~ thanks for the recipe!

Debbie, I just purchased dried apricots from the store. They have them there in a bag just like dried cranberries. Then I just diced them up using my kitchen shears.

I love your blog, your recipes are sooo yummy easy to make and best of all my kids will actually eat every recipe of yours I've ever tried. I was wondering about the apricots in this recipe. It said to use dried apricots, how do you prepare them?

I found your blog through Southern Bride, and can I just tell you I am about 20 pounds heavier just reading it! I can't wait to start trying some of your recipes!