I found a copy cat version of the recipe on the internet and then adapted it to more my tastes.  It’s yummy and different, another great soup recipe.  I read an article once where a professional organizer was telling how to organize recipes.  In that article, it was suggest to you go through your recipes and only keep one spaghetti sauce recipe etc.  I thought this was crazy talk.  You can always have more than one recipe of a certain dish, if they are both great why would you want to get rid of one.

Now, I have two clam chowder recipes and I can make which ever one I am in the mood for.  The other thing that is different about this recipe is how you make the thickener.  You cook the butter and flour together in the oven.  I liked this method.  The soup thickened up very quickly once the thickener was added. 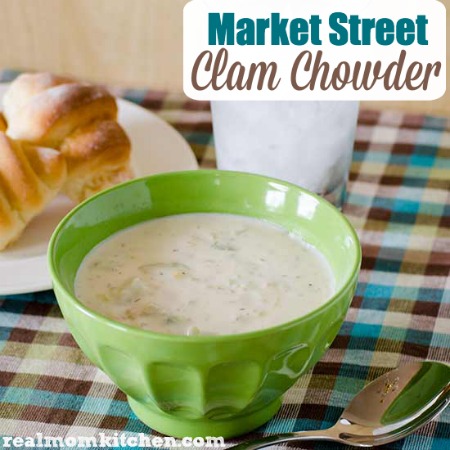 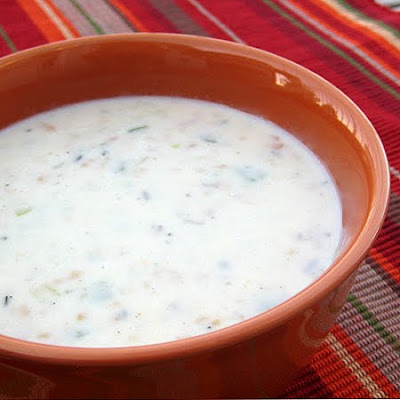 The is the original photo from this post. The above photo was updated in October 2014.

YUMMMM! Is it very clammy? I LOVE LOTS AND LOTS of clams!

Kim, Carly Jane was referring to a message I sent her. She had been asking about why my blog feed had been shortened to not show the whole post recently. I had to shorten the feed because a scrapper had been use the the feed to steal my entire posts and present them as their own on their site. The only way to stop them for now was to reduce my feed to a shortened feed. The scrappers are the dishonest people she was referring too.

Carly Jane – what did you mean by a few dishonest people? I don't see any dishonesty here. Market Street hands out their recipe to people.

My husband loves clam chowder and I can't wait to make this for him! 🙂 Great recipe! -Jessica

Tragic that a few dishonest people ruin it for the rest of us! I understand, however.

Thanks, as always, for another great sounding recipe!

Can't wait to try it! Thank you!

I love this recipe! We went to Market Street awhile ago, I don't like seafood (I know, not the place to go) but I LOVED the clam chowder! I was so excited that they had the recipe printed up on cards for people to take. I love the thickener part too, so easy and so yummy!