I had some cream and bacon in my fridge that needed to be used up. Then, I remembered that I had a recipe I found on What’s Cookin? that was posted by Cheryl. It was for Garlic Chicken Farfalle and it used both cream and bacon.

Now, I did have to make it a little different because of the ingredients I had in my house. I didn’t have the Lawry’s bottled mesquite marinade, but I did have a McCormick Grill Mates dry seasoning packet of mesquite marinade so I used that. I made the packet according to the direction on the back for the marinade and put that over the chicken.

After the chicken had been cooking the the crock pot for a little bit, I opened it made sure all the chicken was pushed down into the marinade. I didn’t have bow tie pasta on hand, so I used rotini. I only used 1/2 pound of bacon to make this. The original recipe used one pound, which seemed like a lot. I also just shook in the pepper, the 1 tablespoon in the original recipe seemed way too much for me.

Last change, I didn’t have shredded Parmesan cheese, so I used the grated stuff in the green can. You know what I’m taking about. I know, but what can I say. It’s what I had on hand, I usually only use the canned stuff for topping off the recipe I have for Divine Breadsticks and the kids like it on top of their spaghetti.

I know this would have turned out a lot better if I had real Parmesan cheese, but it still worked and was still good. I do have to say the bacon was my favorite part, so I’ll definitely do 1 whole pound next time. 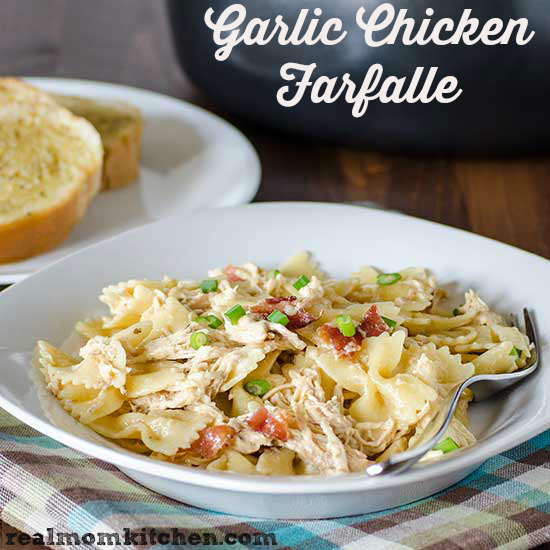 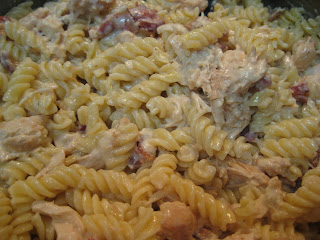 This is the original photo from this post. The above photo was updated in April 2015.
5 comments
0
FacebookTwitterPinterestEmail

I made this tonight! It was very good, thanks!! I used real parm and it was a tasty alfredo sauce!! I will be making again! And you are right…the bacon was the best part!

I made this for dinner minus the chicken. I was surprised that dh liked it since he doesn’t like anything with white sauce. I couldn’t get the kids to touch it though. Overall we liked the recipe. Thanks.

I made this and it is awesome!! Wonderful flavor. But next time I think I will just grill the chicken then cut in strips or cubes. I don’t know what happened but my chicken was just tooo shredded. My husband thought this would also be good with cheese tortellini. Thanks for the wonderful recipe.

This looks absolutely wonderful! I’m going to have to make it this week!