Today, I have another french toast recipe for you.  I apologize for 2 french toast recipes this week but I can’t help it, french toast was my favorite to eat when I was little.  My mom had me eat it all the time to help fatten me up.  I so wish that was the case today, but now I have to try to not eat too much french toast because my waistline really could use a little reduction from all of this food blogging.
Anyway, this is another spectacular french toast recipe.  It really raises the bar for french toast.  This french toast gets a nice crispy coating using panko bread crumbs.  The bread crumbs also include some orange zest mixed into them for a nice burst of flavor.  I told you all recently how oranges remind me of Christmas, so I had to throw the flavor into breakfast week somewhere.
To finish this french toast off is the pièce de résistance – caramel syrup.  There is a little bakery/cafe here called Kneaders and they serve their french toast with an out of this world caramel syrup and a while back they shared the recipe!   Isn’t that nice?  So I decided to use that to top this french toast.  The syrup is amazing and I could eat it with a spoon!  You will have more than enough syrup for this recipe.
This french toast is also baked to make life easy, but you could also fry it in a skillet if you prefer.  I used a gigantic loaf of french bread from Costco to make this so I only needed  6 slices of bread.  It is so yummy for french toast if you can get it.  I did double this recipe when I made it and baked both sheets at the same time.  I just made sure to rotate the sheets halfway through the cooking time.
I have another giveaway today so be sure to check it out.  It could help you with making this french toast. 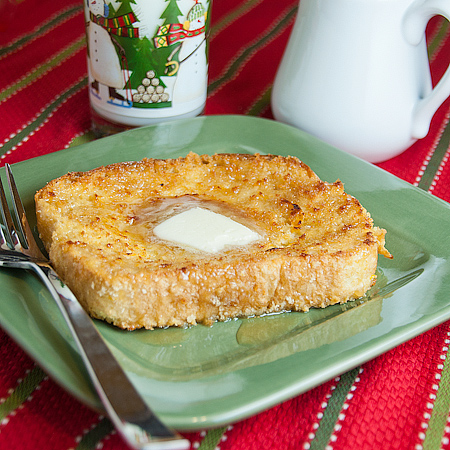 This looks so good! French toast is our favorite breakfast food and I’m always looking for ways to spice it up!