Well, after our trip up the mountain I really was in the mood for a fall treat. Recently, I got an email from Taste of Home. I subscribe to several of the email newsletters. It had a recipe in it for cream-filled pumpkin cupcakes. The recipe says that it originally from their Country Woman magazine. I liked this recipe first of all, because it was pumpkin. Second, because it was a cupcake. And third, because it wasn’t the normal cream cheese frosting that you see with most pumpkin cake recipes.

These turned out delectable. Soft and moist pumpkin cake with just enough pumpkin flavor then filled with a light and fluffy cream filling with just enough sweetness. Scrumptious! I did end up kind of laying the cut out cake circle on its side, on top of the cream filling. Putting it directly on the top was smashing the cake. This is going to be a fall favorite from now on. 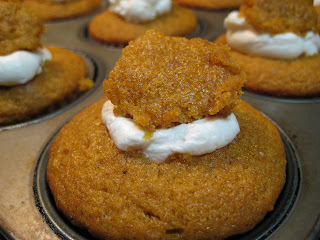 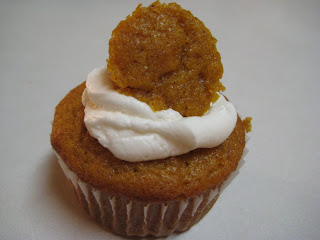 These are the original photos from this post. The above photo of the cupcakes was updated in October 2017.

These were so moist and delicious. I especially like them chilled in the fridge.

I accidentally put the mixture in the cream before it was completely cooled and it made my cream look a little funny but it tasted okay.

I took some of these to a church function and everyone was impressed with how "fancy" they were but they were so easy!

I love how you post recipes that go along with the current season!

Yummy these look so good!! I love fall!! I cannot believe that tomorrow is October!!

Great pictures. YOur pumpkin cupcakes look delicious. I want to make them so bad. I too love the fall in the mountains.