Recently, I saw my friend Jamie share a recipe for a sandwich she had at the Costco “food court” (that’s what I call it).  Shortly after that, my hubby and oldest son had been at Costco and grabbed some lunch while they were there.  They were raving about a new sandwich they tried at the “food court” at Costco.  It just happened to be this turkey and provolone sandwich.  I decided I needed to do some research and go try one for myself.  The things I have to do for you, my wonderful readers, right?

My family loved these sandwiches and gobbled them up.  However, some members had their sandwich made minus the onion and tomato.  Silly picky eaters that live at my house!  This was also a great quick dinner to prepare, basically ready in 15-20 minutes. 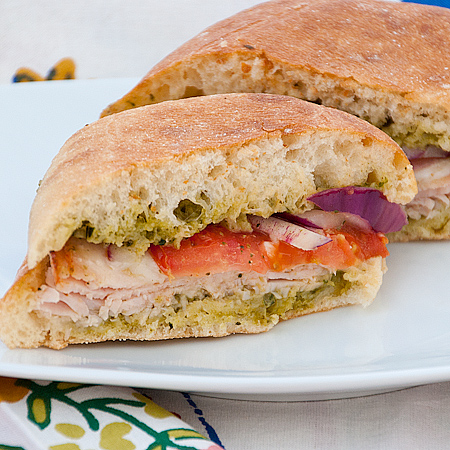 Recipe adapted from Jamie Cooks It Up.

Gettin’ Real with you all

Perfect! These are my sons favorite and he’s been bummed since Costco has eliminated the majority of their options during. For my son’s birthday I decided to see if I could find a copycat recipe. Found this one followed the directions exactly and they were perfect the entire family was so happy

Thanks for the recipe, I make these all the time now. So much easier to make for a picnic than waiting for Costco to open. I did go through the trouble of making my own ciabatta and that makes a huge difference!

I liked it, too, and just linked to your recipe in my blog.

I love these! Me and my prego self have been craving them and now I don’t HAVE to run to Costco to gobble one up! Thank you!

I just had this a couple of weeks ago and thought to myself I bet they have all the ingredients here at Costco and I can make them myself. Thank you these look so yummy!