As long as I can remember, my mom has made this clam chowder recipe. If you’re from Utah, it’s suppose to be like the clam chowder that was served at a place called Bratten’s (I think that’s how you spell it).

I don’t know anything about that restaurant, but that’s what I was told about this recipe. It’s a very rich and creamy chowder. This is a family favorite, and most of my family is not a fan of seafood.

Also for this soup – I recommend my french bread or Molly’s Rolls to serve on the side.

FYI – as luck would have it, the person working on my website was ill yesterday. So my site changed was delayed until tonight after 8 pm MST. Hopefully, tomorrow morning you all will be able to see the site change I have been talking about! 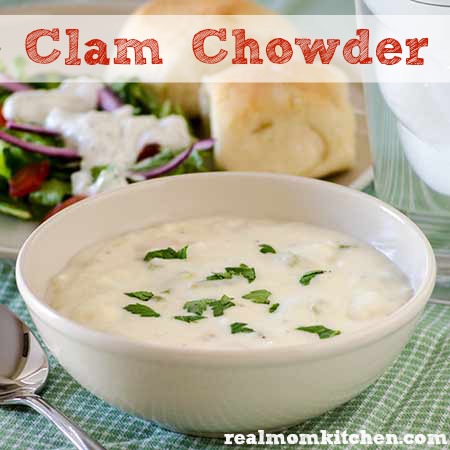 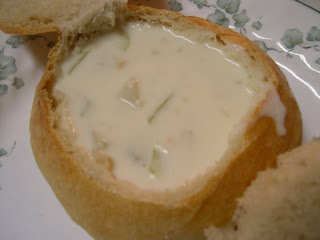 This is the original photo from this post. The above photo was updated in Oct. 2013.
10 comments 2 FacebookTwitterPinterestEmail

What is a cube of butter? I have made this recipe several times and each time used a different amount of butter because there are dozens of answers online as to what people think a cube of butter equals. Each time I have made it is tastes great but it would be nice to know the correct amount to use. Thank you. 🙂

I have this same recipe from Bratten’s, and many fond memories from eating there! There were two locations one in Sugar house and one down on 4th South. It is true to the restaurant taste and in my opinion the best clam chowder recipe there is! Thanks for the memory nudge. The only difference I have is draining the clam juice into the veggies to cook (uses less water and the potatoes soak up the clam juice) I add clams last.

I made this Clam Chowder today and it is delicious! It will definitely go into the recipe box!

this looks even better than Panera bread!

Oh mercy! That soup in that bowl looks TO DIE FOR! I can’t wait to try it!

That looks so yummy! I love clam chowder and it would be perfect for the wintery day we’re having today!

I love your blog- I have found so many good recipes here! Thank you- I have my own little recipe blog and I have posted a few of yours (with links), I hope that’s okay!

That looks so creamy and delicious and wonderful, especially in the bread bowl. I like your new background!