It was my birthday this weekend and I decided to save my night out for when the new Twilight movie comes out. Since we were going to be home for my birthday, I wanted to have something that I like for dinner. So, I decided to make my Aunt’s recipe for Chicken Tetrazzini with mushrooms and all. The mushrooms are big enough I figure the rest of them can just pick them out since they don’t LOVE them like me.

This is similar to a fettuccine alfredo, but you add sour cream to the sauce also. This recipe is full of calories, so it’s something I make occasionally. It is so worth the occasional spluge though. It’s heavenly!

I have made this and frozen this before with success. Just thaw before baking. I also under cook the noodles slightly. 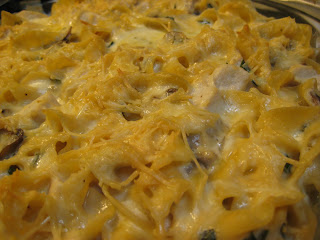 This is the original photo from this post. The above photo was updated in February 2014.

Made this one last night. Not my favorite. It’s ok. I didn’t think it tasted good enough to justify how fatening it is! I don’t think I’ll be making it again.

Happy Birthday. Today (well yesterday now) was actually my b-day) but I didn’t want to cook so we did go out. This sounds like something I would like, but not the rest of the family. I love to check out your latest dishes. Thanks for sharing.

This looks exactly like my kind of dinner. I love meals like this – extra calories or not!

That sounds so awesome! I love that you’re saving your night out for Twilight. I agree! I can’t wait to see it.