IT IS PUMPKIN WEEK here at RMK! I must say this has got to be one of my top theme weeks that I look forward to each year. I love fall and pumpkin week always tells me that fall is here. Now, I have some delicious pumpkin recipes lined up for you including a flashback recipe that is one of my favorite pumpkin recipes.

To start off, we are beginning with an easy one. This recipe makes brownies using 3 ingredients – a brownie mix, some cinnamon, and a can of pumpkin. It results in a dense fudgy brownie!

Then, they get taken up a notch further by topping them with a simple buttercream recipe with cinnamon. This is added to it to highlight that warm cinnamon spice that pairs perfectly with pumpkin. Three shouts for these 3 ingredient pumpkin brownies and three shouts for pumpkin week. I hope you enjoy the recipes! 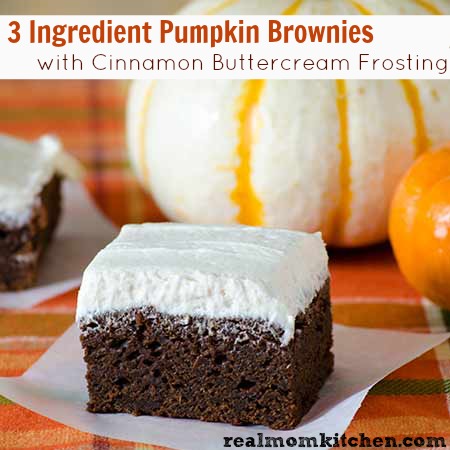 Thank you for this idea. Really tasty and I love any way to sneak veggies into our food!

Me again. I tried this recipe and couldn’t believe how rich and decadent the brownies are, especially for such an easy recipe. This is definitely a keeper. Thank you!

This sounds so good but I just want to be clear. We put the dry brownie mix in straight from the box…we don’t add the eggs or whatever we would if we were making up the mix as regular brownies?

Yep, no eggs or oil. You just mix it with the pumpkin.