Today, I have a pumpkin recipe that I know will be making an appearance at my house every fall from now on. They were a big hit. I wish I had made a double batch. Then again, if I did I could be need a pair of pants with a larger waist. Not only are these no-yeast pumpkin cinnamon rolls magically delicious, they are quite simple to make.

when shaping dough for these no-yeast pumpkin cinnamon rolls. It makes it easier and you can use less flour. 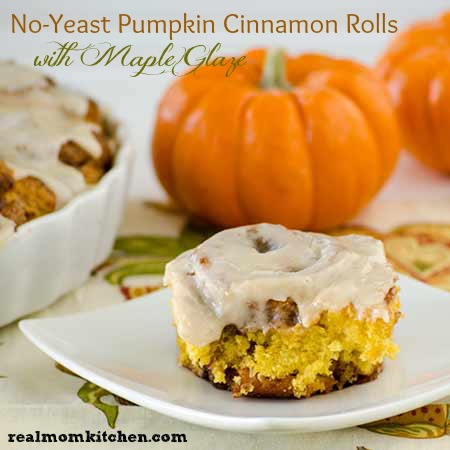 Recipe adapted from Baking in the Attic.

These were cake like, my kids said they were ok, but too Daley. They said they could definitely tell they were yeast free. I also made a gluten free batch. Very good that way.

These are in the oven right now and smell great so far! My only question is when do you put the 2 Tbs. of milk in when making the dough? I don’t think you have it listed in your Instructions, but I assume it would be in Step 2? Can’t wait to dig into these. Thanks for sharing the recipe!

I love a cinnamon roll that doesn’t take yeast! Fun to add pumpkin to it this time of year. These look divine!!!

Yum! These look amazing! And I love that they are yeast free! I don’t make homemade cinnamon rolls often because I am not patient enough to wait. But I will be trying these soon! PS: Love the new look of your site!

Looks great,but you have baking powder listed twice in the ingredients and no baking soda. Is the 1/4 tsp supposed to be baking soda? Thanks