Whole Wheat Waffles and Triple Berry Topping made with Xagave

I am pretty much a creature of habit and would not consider myself an adventurous person, except for in the kitchen.  I love to experiment and try new things, much to the dismay of my family.  So when I was contacted from a company called Xagave to give their product a try, I jumped at the chance.  They sent me a bottle of their product along with a cookbook to use the product.
So Xagave is a form of agave syrup.  Their are two benefits to using agave.  First is it’s low Glycemic Index (30 to 35).  Second, would be it save calories.  It can be used as a complete sugar replacement and you use less than what you would for sugar.  Xagave is 1.4 to 1.5 times sweeter than sugar.  So for every cup of sugar you only need 1/2 to 2/3 cup Xagave.  Because of other cooking properties of Xagave, you can also reduce the fats or oils in recipes with out affecting the taste or texture.
An example of this is with the Zucchini Bread recipe in the Xagave cookbook.  The sugar was reduced from 2 cups to 1 1/3 cup Xagave.  Then the oil was reduced from 1 cup to 1/2 cup.  This saved around 100 calories a slice.
Xagave is also different from agave because it has calcium, iron, and insulin, along with other minerals and vitamins.   I definitely think this product would be beneficial for diabetics.
So I decided to try 3 recipes from the Xagave cookbook: whole wheat waffles, triple berry topping, and sweetened whipped cream.  My family usually gripes about anything I make with whole wheat flour.  Somehow they always manage to figure out when I use it.  Unless it’s in whole wheat bread, there are usually complaints.  However, no one said a thing about the waffles and everyone ate them up.  No complaints just full bellies.
My oldest son and I ate them with the berry topping the others just ate them with syrup.  Personally, I am not sure I could have eaten them with just syrup, but I loved them with the berry topping.  The berry topping was my favorite.  Loved it.  One of the best cooked berry toppings I’ve had.  Usually if the topping involves cooking the ingredients with the berries, they end up breaking down by the time your done and you have something that looks more like berry jam.  Now the strawberries broke down, which I don’t mind, but the blueberries and blackberries stayed whole. I also made this berry topping a second time with honey to see if that would work as well and it did.
Last was the whipped topping.  Now that was the one thing I didn’t care for with the Xagave.  I just didn’t taste right for me, so I cheated and mixed in a little powdered sugar and then it was fine.  Overall, I was impressed with the product.  The whole wheat is the waffles made my tummy very full.  I definitely think it would help reduce calories and be benefically for people who are diabetic or need a low glycemic diet.  I did include substitutions in the recipes below for those of you who don’t use agave.  For info about Xgave and where to get it go to www.xagave.com 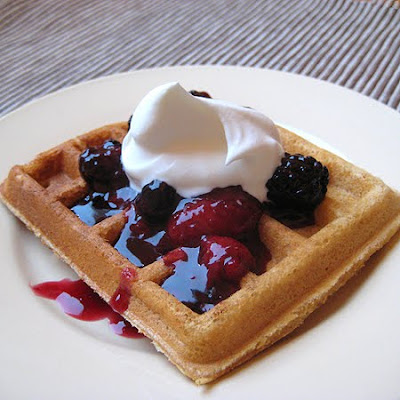 
Triple Berry Topping
4 cups frozen berries
1 cup water
1/2 cup Xagave, agave or honey
2 Tbsp. cornstarch
Put berries and Xagave in sauce pan and bring to boil.  (If using honey add half of water at this point.) Reduce heat to simmer.  Mix cornstarch with water and stir until lumps are gone.  Pour cornstarch mixture into berry mixture while stirring slowly.  Stir until thickens (about 1 to 2 minutes) and begins to bubble.  Serve hot over waffles.
Sweetened Whipped Cream
1 pint whipping cream
2 tbsp Xagave or agave(You can substitute 3 tbsp sugar according to the conversion chart, normally I add about 1/4 cup powdered sugar)
1 tsp vanilla
Combine ingredients in a bowl and beat with electric beater until thick and creamy.

In yr Whole Wheat Waffles with Triple Berry Topping
the Triple Berry part you say “if using honey had have to water” Sorry, but I don’t understand.
do you add water and if so how much?

Did they ever get back to you? I’m very confused as well since I would be using honey.

I clarified things in the recipe. Let me know if you still have questions.

Thank you so much. Looking forward to trying it.

[…] about the minis is they turn out as perfect little cups just right to fill with fruit.  I made a triple berry sauce to put in mine.  I also have a German pancake type dish you fill with a peach/sausage filling.  […]

[…] about the minis is they turn out as perfect little cups just right to fill with fruit.  I made a triple berry sauce to put in mine.  I also have a German pancake type dish you fill with a peach/sausage filling.  […]

[…] can check out some more recipes I tried using Xagave along with info benefits of the Xagave brand HERE.  These recipes are in the cookbook included in the giveaway.  Xagave can be found in some […]

[…] can check out some more recipes I tried using Xagave along with info benefits of the Xagave brand HERE.  These recipes are in the cookbook included in the giveaway.  Xagave can be found in some […]

Thanks for the info. I'll have to try it.

I haven't made the jam with frozen berries but I know others who have. Just let the berries thaw then crush them and make the jam as you regularly would.

I discovered your blog when I was looking for a raspberry freezer jam recipe during the summer. I'm so glad that I discovered it because I've found so many delicious, practical recipes. Thanks!!

My jam turned out great. So great, in fact, that it's almost gone already. Can I make freezer jam using frozen raspberries? If so, how would I do this? Thanks.

I have some of that stuff and have not tried it yet, I will have to give these waffles a try this weekend, thanks for sharing!

Yum! For those of you who have wheat grinders, soft white wheat is the same as pastry flour; it is the SECRET to light, fluffy, whole wheat baked goods~

I too love using the Xagave with fruit. It's great just drizzled over the top!