My family loves Mexican food, but they also love bbq chicken. I recently decided to make a combination of the two and came up with these easy bbq chicken tacos. It is all that you would expect from a delicious bbq chicken sandwich, just placed on a tortilla instead of a bun.

The chicken is all cooked in the slow cooker and is coated with a luscious sauce that includes apricot preserves – sweet and spicy! We personally like to have some sort of slaw on our bbq sandwiches so I also gave the slaw a mexican flair by adding lime and cilantro.

This turned out great and makes a delicious summer meal. The use of the slow cooker is always good for summer! 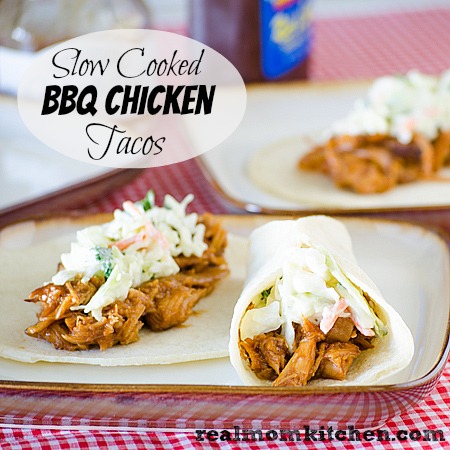 Glad to see you adapted the recipe to suit your tastes! Great combination and will have to try this one out next time I make this.

Love the idea of two flavors meshing. Why haven’t I thought of this before. I’m so doing this on the next taco night! So glad you shared this.

This looks delicious. I like the combination of the BBQ chicken and the cilantro slaw. I’m going to have to try this soon.