I have been talking about trying  a turkey brine for a while now.  I usually just cook a turkey right out of the package with some salt and pepper on it and call it good.  This year I decided to give a brine a chance.  I chose to try a recipe from Kikkoman that calls for soy sauce as part of the brine.  The only downside I could see to doing a brine is having the space in your fridge to put the turkey in the brine.  It is usually hard enough to find space for the turkey, let alone enough space for a pot big enough to cover the turkey with the brine.  The turkey I did was a 16 pounder.
I must say that when all was said and done with cooking the turkey, my husband said “Now that’s the way to do a turkey”.  It was moist, delicious, and full of flavor.  We loved it.   It is worth the effort if you can do it.  I will say, Martha Stewart would be disappointed in my turkey though.  I forgot to tuck the wings and tie the legs.  I do think that one of the best smells is a turkey cooking in the oven!
Of course, I had to include a cranberry sauce for you to go along with the turkey.  I shared my version of homemade cranberry sauce last year.  I highly recommend making homemade cranberry sauce.  It really is quite simple and tastes so much better than the canned stuff.  Once you make it you’ll always want it.  You can also make it a day or two ahead.
This year I decided to adapt my recipe.  I took my recipe and adapted it from an recipe I saw in a magazine.  However, I am not sure which magazine I tore it out of.  Usually it says the magazine name on the bottom of the page.  This page doesn’t.
This time I used apricot nectar instead of orange juice.  I also added some dried apricots and cinnamon to the sauce.  The whole apricot twist was a welcomed change and I enjoyed the slight warmth that the cinnamon added.  I also used the cranberry sauce and leftover turkey to make my turkey cranberry quesadillas.  The sauce was also delicious in that too.
Make sure to stop by my giveaway page.  I am giving away some stuff to help you with your turkey!
Plus, don’t forget about the Virtual Progressive Thanksgiving dinner I am a part of this week.  Today’s host for the meal is Tiffany over at Eat at Home.  She’s sharing a recipe for apples and cranberries in a pumpkin. 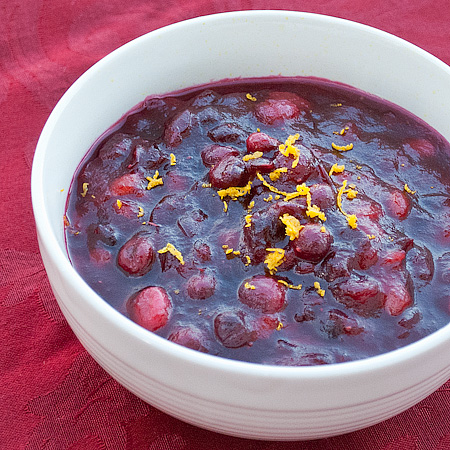 […] you want a more traditional sauce these are also great – Cranberry Apricot Sauce or Cranberry Sauce (my favorite go-to recipe).  Make your own sauce, trust me on this […]

[…] way to do a turkey.”  The thing that is funny is my hubby also said last year when I used a savory brine on the turkey.  I must say the turkey was so moist and […]

I’ve never tried a turkey brine (well, I’ve never actually cooked a turkey either!) and I’d love to know how the brine affects the sodium content of the turkey!

I have been brining my turkeys for a few years now. I always use Alton Brown’s brine recipe (food network). It definitely makes for a juicy and delicious turkey. Alton’s brine recipe uses ice cubes and I think that helps with not having to put it in the fridge. I live in Idaho, so we just keep it in the garage and it stays cold enough. 🙂
Love your site and your recipes!! Thanks!

I don’t see why not! Let me know how the chicken turns out.

Would the brine work for a whole chicken?

Someone on another site suggested cleaning out a crisper drawer and using that space to brine the turkey…could work if the bird wasn’t too big.

I have always wanted to try a brined turkey, too! I think I saw once that you can fill your brine bucket with ice to keep that turkey cold, too!

I have been in charge of the turkey for a few years now and have always soaked it in a brine the night before. this is sorta like the one I have always used only difference is I don’t put garlic & onion in it but may have to try that this year. https://allrecipes.com/Recipe/Citrus-Turkey-Brine/Detail.aspx
Also my trick for the refrigerator problem is easy-first get your cooler, dump a bunch of ice in it, then get a garbage bag (clean one works best 🙂 ), put the turkey in it, pour all the brine ingredients in, now squeeze the air of of the bag and tie shut, make sure to snuggle it down in the ice and close the cooler! if it is chilly set out side on your deck or I usually just leave it inside in the kitchen the ice keeps it cool enough and I am pretty sure Alton Brown (who convinced me to brine) said something about the salt in the water keeping you safe from poisoning your family:)
I also make my own cranberry sauce mine uses orange juice and orange peel, sugar, water, and cornstarch

I used a frozen turkey and it was not salty at all. That is why you rinse the turkey after the brine, it will get rid of the excess salt.

Thanks! I can’t wait to try it this year!