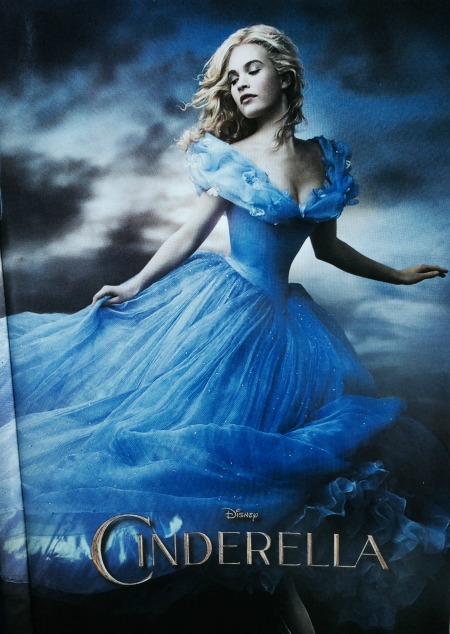 My daughter was out of school today for parent teacher conferences, so we decided to to see the new version of Cinderella from Disney. We also invited my mother-in-law too, who was in town for the weekend.

I like that Disney has been taking traditional classic Disney animation films and turning them into live action live films. I loved the animated Cinderella as a girl and was excited to see how this version would be.

This version gives a little more back story of how Cinderella got into the living situation with her step mother and her step sisters. As part of that, we get to see Cinderella’s mother and father and we also find out how she got the name “Cinderella”.

I loved Lily James (who also is Rose in one of my favorite shows Downton Abbey) as Cinderella and Cate Blanchett as the step mother! You can also see Daisy from Downton Abbey (Sophie McShera) as Cinderella’s step sister Drisella.

The only character I didn’t care for was the portrayal of the Fairy Godmother. It was played by Helena Bonham Carter. I kept thinking that she was like a female version of Jack Sparrow. She is said to be close friends with Johnny Depp, so maybe that’s why I was getting that vibe.

There was also a little more cleavage and heaving bosoms than I would I liked to have see with it being a movie geared more toward young girls. However, all in all I loved it! I would give it a 4 out of 5 stars.

It is more emotional than the cartoon version. So if you have children who are extra sensitive, I would proceed with caution. I would recommend it for children 8 or older.

A great added bonus to this movie is the short film Frozen Fever in the previews before the movie. It just adds to the excitement of the announcement this week of a Frozen 2. Yes, I am a frozen fan! This cute film shows Elsa wanting to give Anna an amazing birthday but ends up with a cold. It’s short and sweet but all Frozen fans will love seeing all of their favorite characters.

Something Old and Something New

My Dad – A Tribute