If you love pecans, you have to give this recipe at try. I saw this recipe for pecan praline bars this last week on a local show called Studio 5. Now, I absolutely love pecans and pecan pie, so this recipe called my name.

I had everything on hand to make this so, I gave this a try today and it was delicious. I even got my whole family to give it a try. They usually turn there nose up at anything with nuts in it. They all ate it and all enjoyed it. That was a huge accomplishment at this house. Good thing I only made a half recipe too. I know myself too well and the leftovers would have been too much of a temptation. These pecan praline bars would have been calling my name later tonight.

The base of these bars are like a shortbread. They start by beating the butter until soft. The you add in some salt, brown sugar and flour. Then it’s pressed into the pan. 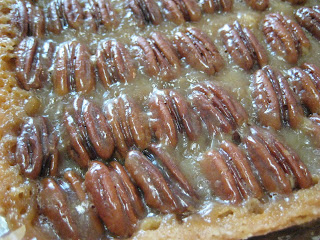 This is the original photo from this post. The above photo was updated in December 2013.

Oats and Everything Bars

These are in the oven as we speak. Thank you for sharing this recipe!!

Oh how I love pecans. This recipe looks great.

Kudos to you for being smart enough to only make a half batch! They look beautiful! And yummy.

Oh my word that looks devine! I am going to try that maybe even tonight.
Your blog is awesome. Great recipes!

I have to agree with LULA. Southerns love some praline and pecans!

I love love love pecans but not the sticky goo of pecan pie. This looks like a good alternative for me. Thanks for sharing and congrats on earning the spotlight today!

For the nut lovers in my family- I will have to try! Congrats again!

Oh, so good, so naughty!

I love pecan pralines, my mouth is watering 🙂

I love it when recipes call my name…and even more when yummy desserts are calling me as well.

I need a good excuse to make this!!!!

Oh, yum! Lula is right. A southern girl’s ears perk up at the sound of a praline!

You had me at pecans!

Congrats on the feature! You have a lovely blog.

Yesterday, I went to visit an old friend’s husband (my friend passed away on Monday). Del was doing okay, all things considered. While I was there, he mentioned that he has always loved pecan pie but that his wife would never make it for him. Guess what I’m going to make for him this week? Thanks for the recipe!

My kids don’t usually like things with nuts either, but these almost look like candy so they might just go for them. I know my H and I would love them!

When a southern belle hears “pecan” and “praline” in the same recipe, she starts running. And yes, I’m running…to make this!

This looks good as well.

I love baking, but don’t like keeping it in the house because it’s too tempting.

As a result,my friends, my neighbours and my husband’s workmates quite like it when I decide to bake. They get the fruits of my labours…