Over the summer, my middle son got a job at a new local Denny’s restaurant. We haven’t had a Denny’s in our area for years and I could even tell you the last time I ate at one. However, with my son working there, we would periodically go over there to have a meal and see my son in action at his first real job.

Since my son worked there, he would eat there everyday he had work, which was a lot because he worked almost full time hours during the summer.  So I would ask my son for recommendations on what to order, since he had tried a lot of the menu. Pancake puppies was one of his recommendations and I must say that it has now turned into a favorite of mine.

So pancake puppies are basically a pancake version of what is know as hush puppies. Scoops of the pancake puppy batter is fried in oil. Then they are served with a sprinkling cinnamon sugar along with a side of syrup for dipping. They are little morsels of pancake heaven I tell you.

So, of course, since I loved them so much. I had to attempt to make a copy cat version of them at home. I must say they turned out pretty darn good. Now, I like them with a sprinkling of the cinnamon sugar on them but my husband prefers to have them rolled in the cinnamon sugar like the ones in the picture.  So it’s just personal preference. I think they are too sweet to eat with the syrup if you roll them in the cinnamon sugar. 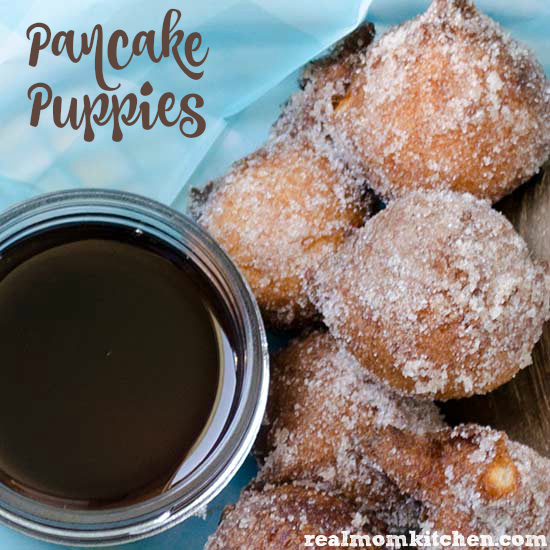 Recipe adapted from The Country Cook.

I can’t believe I haven’t made these yet! I was scrolling through your recipes again and I thought I should email the recipe to myself. Then I noticed I already had when you first posted them! Ha! I’ll be making them soon. 🙂