No Cream of Soup Potato Casserole (aka Funeral Potatoes)

Today’s recipe is what is traditionally known here in Utah as funeral potatoes. I know it is a weird name for them, but it get that name because it is usually served along with ham at a luncheon following a funeral. I have heard in other parts of the country that the recipe is known as party potatoes. Whatever you like to call them doesn’t matter. They are delicious and are excellent served with ham and a must for Easter at my house.

Now, the traditional recipe I know calls for a can of cream of chicken or cream of mushroom soup.  I have make other similar versions made using whipping cream (Shredded Potato au Gratin and Market Street Potatoes Au Gratin) but they don’t have that creamy consistency of the recipe make with the cream soup and tend to be drier than the traditional recipe also.

So I was happy to try a version that was just as creamy as the traditional version, but without the cream soup.  With this recipe you just make a cream base in its place and they turn out just as rich and creamy! 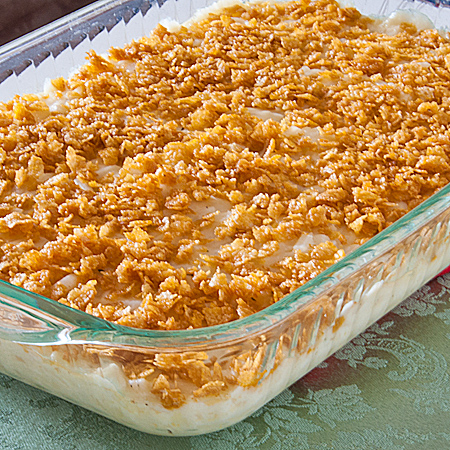 Can you make ahead for next day or freeze?

I will be happy to try this recipe. I cannot eat msg without throwing up so no Campbell soup in my food.

I need to eliminate white potatoes from my diet and funeral potatoes are a Easter brunch tradition. Have you substituted sweet potatoes for the hash browns in this recipe? What are your thoughts.

where are the potatoes in this recipe and how much do we use?

They are the shredded hashbrowns listed in the recipe as well as the instructions.

Can this casserole be made ahead and frozen?

Can’t wait to try this for Easter dinner tomorrow. We also are trying to avoid artificially flavored or colored foods, and extra salt or MSG.

This is by and far our fave party potato recipe! Thanks for sharing! I’m planning to make it for a brunch but my oven space is limited. Do you think it would be ok if cooked in a crock pot?

I made this tonight and it was delicious!!!! I was so excited to find a version of this recipe that didn’t have canned soup. I’m allergic to anything derived from corn and there is a lot of that in canned soup. –I added a little extra onion powder to the mix and crunched crackers on top instead of cornflakes. Fantastic!!!

THANK YOU!!! We are trying to eliminate all processed foods in our home and this was exactly what I was looking for. Life-saver you are!!

I live in the Midwest in a small town & I can tell you that we too make these for funeral dinners! Some top them with cornflakes others do not, but my Mother’s tried & true recipe that she makes for every funeral dinner our church has includes cornflakes! So funny to see that this is a tradition in Utah!

How can you be so proud of eliminating the “cream of” soup and then top the whole dish with cornflakes?

What is wrong with Corn Flakes?? They aren’t unhealthy. Now, if it called for Cap n’Crunch, that would be unhealthy!

This is on the menu for our Easter dinner – we love this one!

Looks amazing! 🙂 I’m going to have to add them to my Easter menu TOO! 🙂

I’ve tried to make my own version of this dish without the cream of whatever soup, and I haven’t ever really been satisfied with how it turned out. I can’t wait to try this one!

[…] post: No Cream of Soup Potato Casserole (aka Funeral Potatoes) | Real … This entry is filed under […]