We begin Easter week with the main dish – ham.  I have had pineapple glazed ham before but was curious how the addition of lime would be.  I must say, it isn’t that traditional flavor but I thought it was delicious and refreshing.  The lime really adds a pop of flavor and I was surprised at how it tasted. 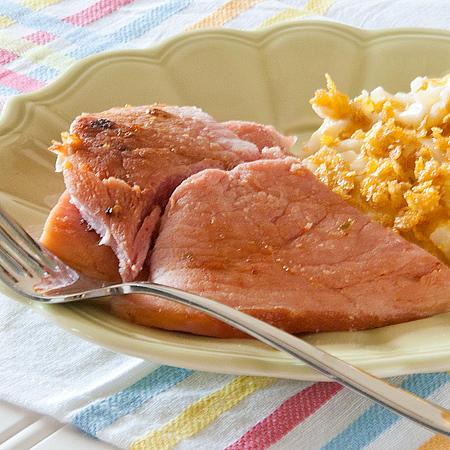 No Cream of Soup Potato Casserole (aka Funeral Potatoes)

This looks like a delicious recipe and we are actually trying it tonight since I was out of town for the real Easter Sunday. I thought you might like to know that your recipe never indicates what to do with the lime zest after you “set it aside.” I figured it out by looking at the original recipe but I thought you might like to include it in your adapted recipe. Thanks again for the recipe. I am excited to serve this yummy ham to my family!

Just in time for Easter! Sounds delicious! I can’t wait to have a big ham on Easter!

I love ham! And look forward to trying this new recipe out! 😉

I actually made ham last night with a sweet cherry glaze that I am posting next week as part of my Easter week! LOL! This ham recipe looks lovely! I love the combination of the pineapple and lime. I can’t wait to see what other recipes you have in store for us.

Easter would be fun and a time for family and friends after the lent. Eating ham would be a great reward for not eating meat during the season. I also got curious about your lime ingredient and how the taste will turn out. Thanks for sharing =)