It’s Easter week here at Real Mom Kitchen.  We are talking recipes for your Easter dinner all week long.  I am also participating in a virtual Easter dinner with the same group that I did the virtual progressive Thanksgiving dinner.  Each of us will be posting a recipe as part of the meal this week too.  So each day, I’ll let ya know where to go to find other great recipes.  I am where the virtual dinner begins.  Here is the rest of the week:

Easter for me always means a ham and a bone in ham is the only way to go in my opinion. It has the best flavor.  I decided to try out a glaze recipe this year.  The one I chose to do was a mustard orange version.  I thought the tangy mustard with the sweet orange would be a good combination.
The method for cooking this ham was also new for me.  I usually just throw the ham in my roasting pan and call it good.  This time I brought out the roasting rack.  I usually only use this when cooking poultry but thought it was worth a try with the ham.
The ham was delicious!  The glaze really made it even better and it is a breeze to mix up.  I only used a 6 pound ham and the recipe called for a 9-10 pound.  This was actually a good thing because I ended up with extra glaze.  I put what was left into my microwave, cooked it for about 30 seconds until it started to bubble.  Then I drizzled it over the ham slices.  Oh it was so good!  I was glad to have the extra glaze, so if you are making a larger ham, you just may want to make extra glaze!
The orange and mustard in this glaze complement each other well and also work well with the flavor of the ham.  I think I will be trying a new glaze every year it was fun and made a basic ham heavenly! 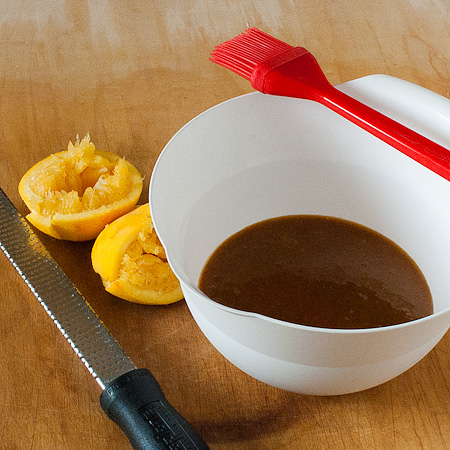 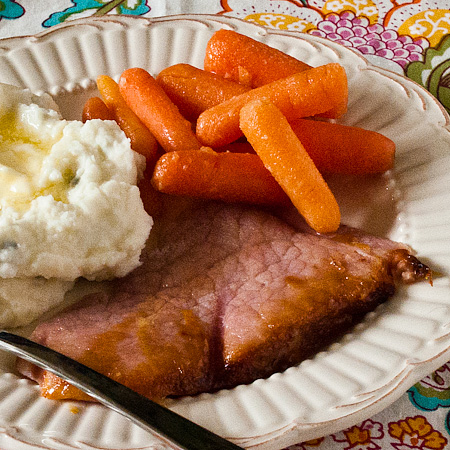 […] This Mustard Orange Glazed Ham is from Laura at Real Mom Kitchen, who adapted an existing recipe to complement the tanginess of mustard with the sweetness of a fresh squeezed orange. […]

[…] all in once place.  The only ham recipe I have for you  besides the one from this year is the Mustard Glazed Ham.  I made this one last year and loved it.  Check out the rest below, I have a good list for […]

I used this recipe to make the Easter ham this year. I cooked it in the crockpot. The glaze was amazing!

[…] Glazed Ham from ME! Spring Vegetable Orzo Pasta Salad from Shaina @ Food For My Family Hungarian Cucumber Salad from […]

Ham is a must at Easter!

This looks so yummy! gonna have to give it a try!

An impressive main dish with just a few ingredients is always a winner!

Amazing! Love pairing fruit, in your case, oranges, with a main dish. This looks fantastic, Laura.

This looks really good Laura! I’m always looking for new ways to jazz up the old favorites.
Thanks for sharing!
~Liz