In Utah, there is a recipe that everyone has heard of called Funeral Potatoes. The reason they call it funeral potatoes is because it is usually served at funeral luncheons. I know, it’s a little weird.

Anyway, the recipe is a casserole that usually contains hash browns, condensed creamed soup, onions, butter, cheese, and sour cream. Everyone kind of has their own variation of the basic recipe. It is usually served along with ham too. Well, I saw this ham and cheesy noodle casserole from Emaline at The Open Pantry. I had to try it.

It’s basically the same recipe as Funeral Potatoes, except you use pasta instead of potatoes and ham is add to the casserole. This was a hit at our home. It is now going in the tried and true file. I also think it would be a great dish to take in to someone if they have a baby or surgery, etc. Thanks so much Emaline. 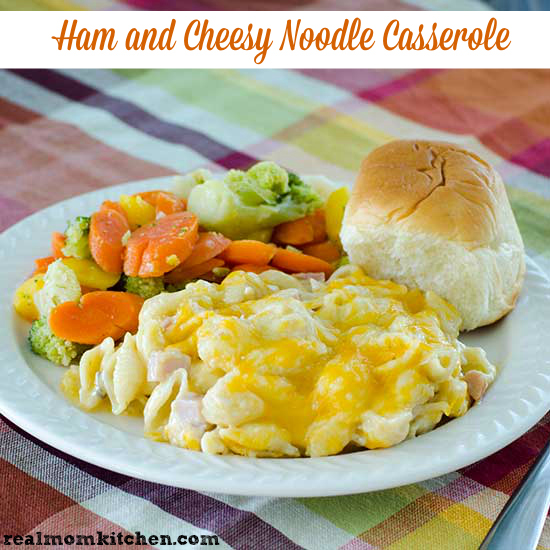 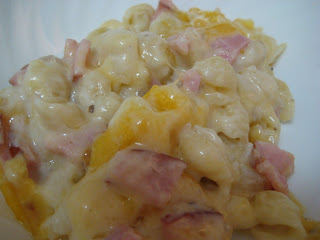 This is the original photo from this post. The above photo was updated in April 2018.

Excellent! Best casserole I’ve ever had. I used Gouda cheese which gave it a great flavor, and our left over Easter ham. I also used a home grown pepper which had a different flavor than a store bought bell pepper. I used low fat sour cream and reduced fat mushroom soup. My husband gave it a 10 out of 10 for a casserole. I will definitely make it again. Thanks for the recipe! Delicious!

How long approximately do you bake it for?

In Kansas we call them Wedding potatoes!! Funny. I am trying this tonight or tomorrow, looks so yummy!!

Laura thanks so much for trying out my recipe! I am glad that your family enjoyed it!

That looks so good,I’m going to be making it this week for sure!

That’s so funny that you call them “Funeral Potatoes” in Utah…here in Michigan they’re “Party Potatoes”! Good idea with the pasta!

I know of this “Funeral Casserole” you speak of. This recipe is such a close but yet so different.

I made it (this recipe) for dinenr tonight and the whole family loved it. It is now in our recipe book. Thank You.