These grilled Hawaiian teriyaki chicken bowls are a perfect summer meal. They all begin with coconut rice for the base. I used the Instant Pot recipe that I shared on Tuesday. I just left out the lime zest. However, I have a version for the rice cooker if you’d prefer to make it that way.

Next, these is a veggie mixture that you can grill in a grill basket on the grill or roast in the over. Either way works great. You just give them a light coating of olive oil and season with salt and pepper. This recipe uses zucchini, peppers, and onion. I do think some mushrooms would be a nice addition though.

You also grill some chicken. I opted for chicken tenders because they cook up so fast. However, feel free to use regular chicken breasts if you prefer. All I did was season the chicken with a little salt and pepper before grilling.

Next up is grilled fresh pinepple. Fresh pinapple is great by itself, but some thing magin happens when you grill it. It gets even sweeter and gets some of that grill flavor with it.

Lastly is the teriyaki sauce, Now you could always opt to just pick some up at the store to use on these bowls. However, homemade teriyaki sauce is so much better tasting and it’s not that hard to make. I strongly recommend chooses to make the sauce from scratch. 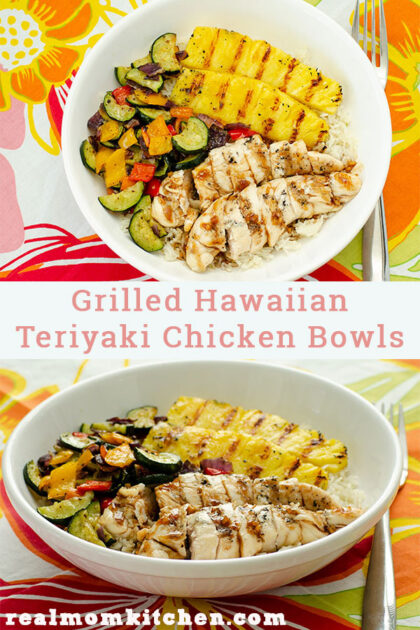