This recipe is fun to make especially at Halloween time simply due to the name of this salad. This recipe comes from my mom. She’s had this recipe for as long as I can remember. You make it with a pasta that’s called acini de pepe. The pasta looks similar to tapioca after it’s cooked. That’s where the name for the salad comes from, the pasta looks like little frog eyes when it’s cooked. The name may be a little odd but not the flavor of it. It makes a creamy, fruity pasta salad. This salad can be easily reduced in half. If you do half it, I would suggest just using one whole can of the crushed pineapple, unless you want to have half can of crushed and a half can of tidbits leftover for something else.
Then for those of you here in Utah, make sure to watch or record Studio 5 on KSL channel 5 tomorrow at 11 am. I entered the Studio 5/Pier 49 Pizza contest and was one of four finalists. Unfortunately, I’m not the grand prize winner who will be announced on the show tomorrow. However, each finalist won a $40 gift certificate to Pier 49. Last week they had all the finalists come into one of the Pier 49 locations and make their pizzas. They filmed us all making our pizzas. Then after making the pizza, we left so the judges could taste them all and make their decision. I won’t give details of the pizzas today because I don’t want to ruin it for those of you who can watch the show. However, in my post on Friday I’ll give all the details about the pizzas for those who are unable to see the show. I’m also hoping they may put a link on the website where you can watch what they aired on the show. Let the record show, I think the winner is the girl who made the “Greek pizza”. That’s all I’m gonna say. Tune in tomorrow fellow Utahns. 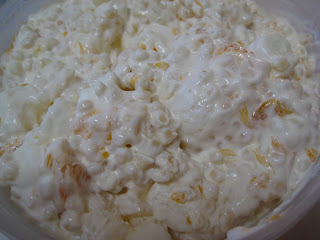 Add sugar, flour, salt to sauce pan; add juice and eggs. Stir constantly over medium heat. Broil to boil and cook until thick. Remove from heat. Add lemon juice and cool. In 3 quarts of boiling water, cook pasta for 10 min. Drain and rinse in cold water and drain again. Stir pasta in with cooked mixture in bowl and refrigerate overnight. Before serving add fruit, cool whip and marshmallows. Other things that you can mix in are bananas, coconut, maraschino cherries (slice in half)

The box of pasta how many oz? Thanks

The cans of oranges. Can you be more specific as to what size/oz cans specifically? Thanks

I was thinking about making this for dinner, but just noticed you need to refrigerate over night. Do you feel it’s necessary or would it be okay in the fridge for a 2 hours?

Can any of the leftovers be frozen?

Yes, this can be frozen quite easily. It’s really good a little icey 🙂

I used to make this all the time! Sooo good! Looks and feels really weird at first but has a great taste. We always use rainbow marshmallow and add a handfull of maraschino cherries (cut in half). We lay it on the top but it usually gets mixed in when the first person digs in!