I LOVE Dulce de Leche.  I could each it right from the can.  So when I saw Tina at Mommy’s Kitchen (another one of my good blogging buddies) share a recipe for homemade Dulce de Leche, you know I was gonna try it.  Her recipe is made for a 4 qt ice cream maker.  I wanted to make it in my 1 1/2 quart Cuisinart. So I adapted the recipe so it would fit in the Cuisinart.
I also decided to top mine with some chocolate ganche and instead of putting the pecans in the ice cream I just sprinkled them on top.  This way if you have people who don’t like nuts, they will be happy too with this ice cream.  My original intent was to warm up the 1/2 can of remain Dulce de Leche to drizzle on top of the ice cream.  However, I had my mixture chilling in the fridge and went to get something else out and ended up spilling my entire ice cream mixture.  Yes, I was not thrilled about the mess I had to clean up and I ended up needing to make a new batch of ice cream.  So needless to say, that is why there wasn’t anymore Dulce de Leche to drizzle on the ice cream.
This ice cream tastes just like Dulce de Leche.  It was delicious.  I wish I would have been able to drizzle each bowl with some extra Dulce de Leche to make the flavor even stronger.  However, I must say that the chocolate ganache was the next best thing.  The ganche hardens slightly with the coldness from the ice cream giving you a nice fudgy consistency.  You end up with creamy Dulce De Leche ice cream with bits of fudgy chocolaty goodness followed by crunchy pecans.  It’s a party in you mouth!  Thank Tina! 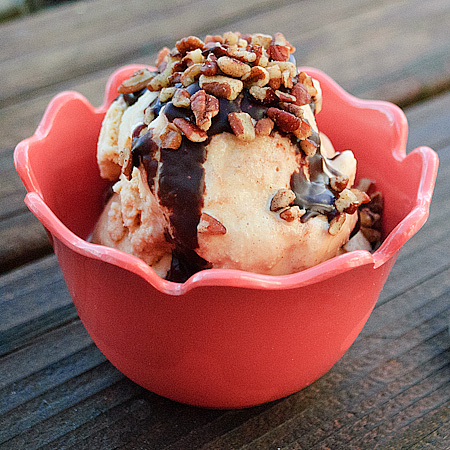 In a microwave safe dish, microwave cream and chocolate for 20 seconds.  Stir.  Microwave for 10 second intervals, stirring each time until chocolate is melted.  Allow to cool for 20 minutes before serving on ice cream.  If you let it cool too long just microwave for a few seconds again until desired consistency.

Red Velvet Cupcakes and other sweet treats for...

I had no idea what dulce de leche was, but this sounds and looks fantastic!

Oh yum, I just love dulche de leche ice cream.
This would look fab served on my Versace tray giveaway, pop over & check it out https://debskitchencreations.blogspot.com/2010/08/giveaway-beautiful-versace-piece-to-add.html

I’m a huge fan of dulce de leche too and this looks awesome!

Think I’m going to dig that icecream maker out that I got 5 years ago for Christmas and never used to try this one out! Yum!

It looks so good Laura! I’ve never made homemade ice cream. I’ve got to try it one of these days!