As a young girl, I remember my mom occasionally treating us to a meal at Taco Time. Taco Time is a fast food Mexican restaurant like Taco Bell. I had three favorite things to get from Taco Time – their Crisp Bean Burritos, Crisp Tacos, and Cherry Empanadas. I also loved to dip the crisp bean burrito in ketchup.

Then when I was in college, there was a Taco Time right across campus. I would frequently go there for lunch. I would usually get a crisp bean burrito and a crisp taco for $2 or less.  It worked well for this college student.

Well, I recently decided to make a version of Taco Times crisp bean burrito at home. It is just basically refried beans and cheese wrapped in a flour tortilla and fried in oil until crisp and golden. Now, I must tell you that these actually work best with a less expensive flour tortilla. They tend to be on the thinner side and crisp up nicely. Give em a try! 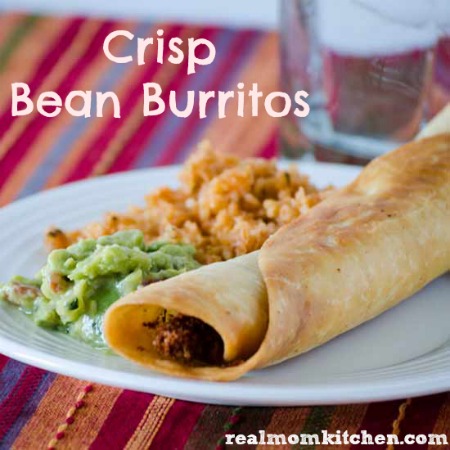 Oh, I remember those cripsy tacos! We haven’t lived anywhere close to one for over 15 years now though. Thanks for the recipe!