Back in October, I was invited to go to Chicago for an event  (Live Well 2013) for the Beef Checkoff (they are the “Beef, It’s What’s for Dinner” people). It was a fun event where I learned a lot about beef and meet some amazing people. When I got back, I had a lot going on, then it was the holidays, and I just haven’t had the chance to share with you all until now.

One person I learned the most from while I was there was Chef Dave Zino. He knows a lot about beef and how to cook it. He also taught us about umami. If you have some type of sweet, bitter, sour, and salty element in your dish, you achieve this amazing umami or savory taste. 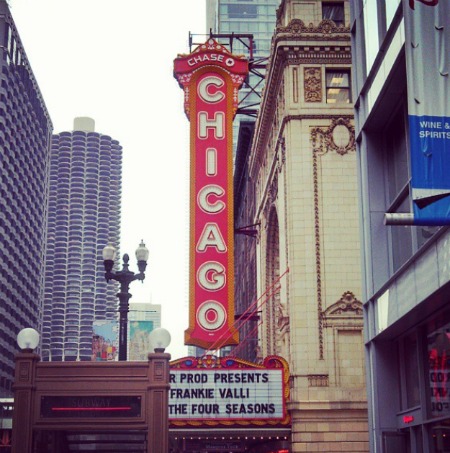 We also got to hear from Anne Burkholder, an owner/ operator of a cattle feedyard. It was interesting to hear from her how a feedyard works. I got to meet Lauren from Lauren’s Latest along with Brenda from A Farmgirl’s Dabbles. Both of their blogs are ones I follow and it was fun to meet them in person. It is fun to have some people to talk shop with. I  know Camille from Six Sisters Stuff who was also invited, so it was fun to hang out with her. I was able to get to meet many other great bloggers (see a list at the bottom of my post).

The Wit Hotel is where I stayed, which was amazing.

I only wished I had realized the first night that my window in my room was cracked open. It would have helped reduce the noise of “The L” near by. The second night with the window shut tight was much better! 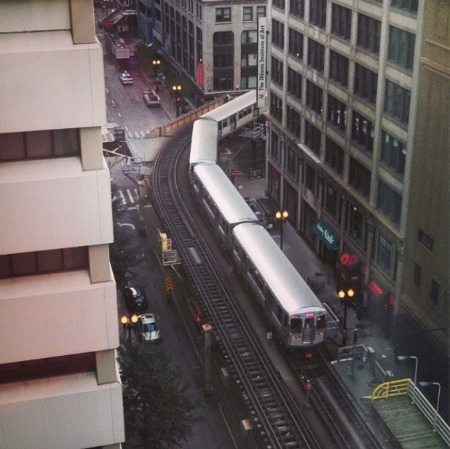 Of course there was a lot of yummy food while attending the event. One morning we had a private breakfast at the roof top restaurant of the hotel. They made a special beef and sweet potato hash recipe from the Beef Checkoff. It was so tasty, I could not wait to make it at home. This is the recipe I am sharing today. 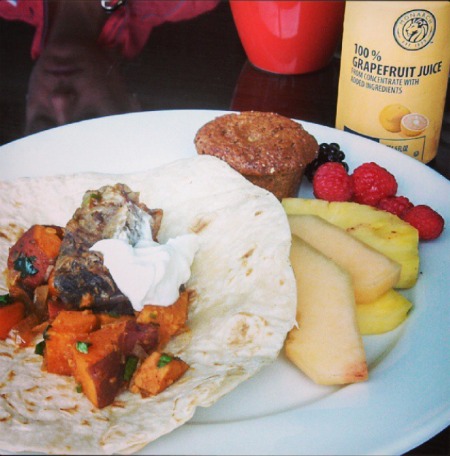 I ate at the State and Lake Tavern in the hotel twice. I grabbed a tasty chicken panini for lunch when I arrived.

Then on my last night in Chicago, I tried their Curd Burgler’s Burger with cheese curd and sweet potato fries on the burger. I was still wanting to continue my beef experience. I like salty and the cheese curd gave this burger a nice salty punch.

The burger was probably one of the best I have ever had and the sweet potato fries were honestly the best I have ever had. They had a coating that made them crisp and flavorful. Oh, and they even had homemade pickles to put on the burger! This is one of those meals I dream about after. This is definitely a place to hit if you are ever in Chi Town. 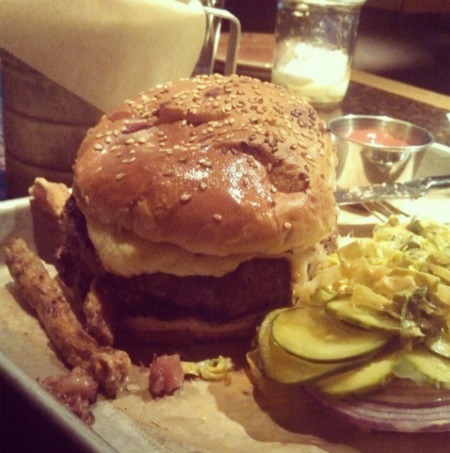 The first night we went on a little progressive dinner with appetizers at Sable Kitchen and Bar and then had dinner at Mastro’s Steak House. 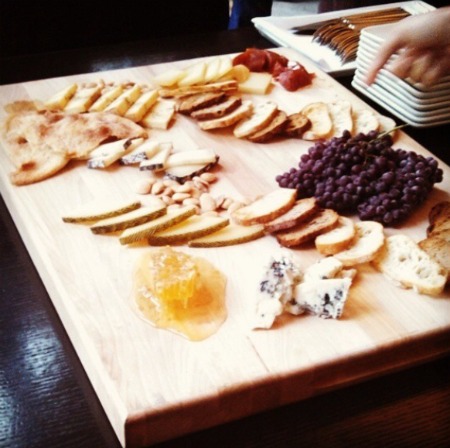 The main dish was amazing, we had a petit filet with mushrooms. In my opinion, that is how too eat a filet!  The dessert was even better.  The cheesecake was pretty darn good, but the butter cake was phenomenal. A whole pound of butter goes into one little cake! The photo below is the sampling plate we received at our table for dessert. The 8 of us at our table pretty much devoured the who thing. 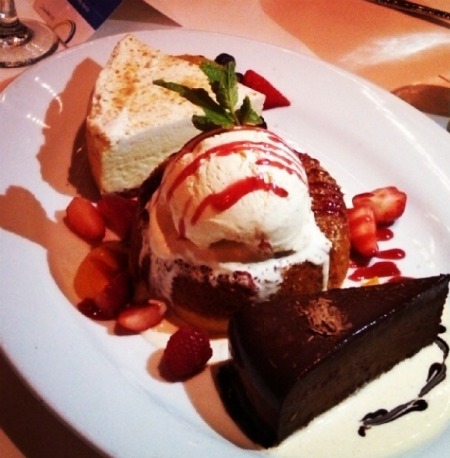 Our last day we got to get in the kitchen ourselves at The Chopping Block.

They offered us a cooking challenge. We were divided into groups and given a cut of beef to use along with an item we needed to make over using that beef. My group was given jalapeno poppers. We opted to make jalapeno sauce to serve the steak over. It was fun to see how the other groups did too. 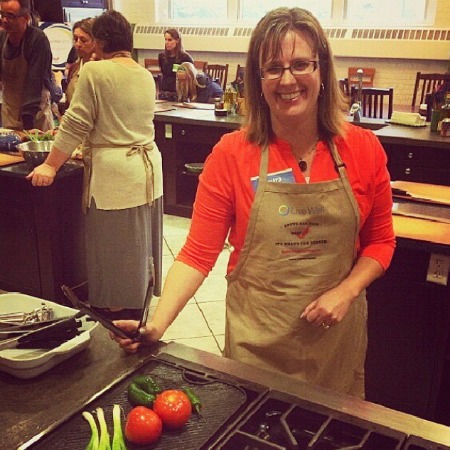 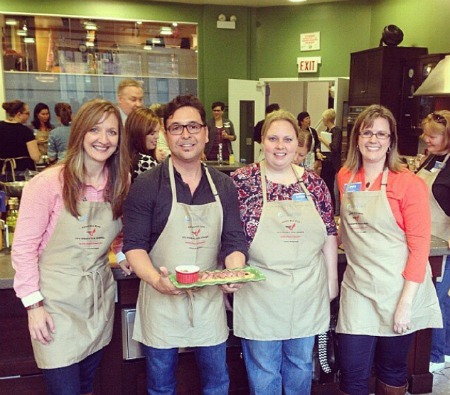 Now on to the recipe. This beef and sweet potato hash is simple to make and tastes amazing. You could totally  just make the sweet potatoes in the recipe by them selves as a side dish. I will probably totally do that now. However, it is quite tasty with the addition of the beef.  This is perfect for when you have some leftover beef. However, if you don’t have any just cook some up. That is what I did. I used a sirloin, cut it into pieces and cooked it up in a skillet.

You can eat it as is with some eggs cooked however you like them on the side. We had it served to us in a tortilla, like a breakfast taco. I loved it that way. Add a little sour cream and cilantro and you are set! 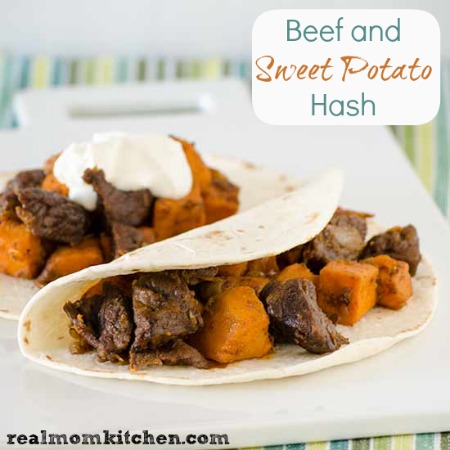 If you don’t have any cooked beef just cook some up. I used a sirloin and cut it into cubes. Then seasoned it and cooked it in a skillet.

Disclosure: All expenses for my attendance at LiveWell 2013 were taken care of by the Beef Checkoff. I was not compensated to write this post. My opinions are always my own.

[…] Fall, I was asked by the Beef Council to be a part of their Beef Experts Bureau. It has been a fun experience so […]

[…] since my trip to Chicago with the Beef Council, I have been more adventurous with different cuts of beef. I have never cooked with a flat iron […]

It was great to meet you! Thank you for sharing a great recipe 🙂

All the best,
Anne

So nice to meet you! Hope you see you soon at another event 🙂 xoxo

Meeting you and eating this sweet potato hash were two of the best pieces of this trip, Laura! Chicago is always awesome, and Beef Checkoff did a great job with this trip.