Usually, I like to make recipes with ingredients I usually keep on hand. But when I saw this recipe years ago, is sounded too good not to try. This sophisticated grilled cheese is more like a special occasion sandwich. This recipe came from an issue of Simple and Delicious magazine back in 2009.

I renamed the sandwich from ham and brie melt to Sophisticated Grilled Cheese. This really is a fancy version of a grilled ham and cheese. Now you don’t have to use brie cheese, but it’s so worth it. I do think you could substitute mozzarella if you must. Brie tastes good with fruit and the apricot preserves went very well with it.

The recipe calls for apricot preserves, but peach preserves also works just as well. As far as the ham goes, I like to use a black forest ham. It’s my favorite ham.

You can also use whatever bread you like. I really did like the extra texture and flavor that the multi-grain bread I like to buy for this sandwich. For those of you in Utah, I just purchased muti-grain bread from my local Macey’s. They have a brand they carry called Farm Bread which is fabulous. It’s available at most associated food stores. 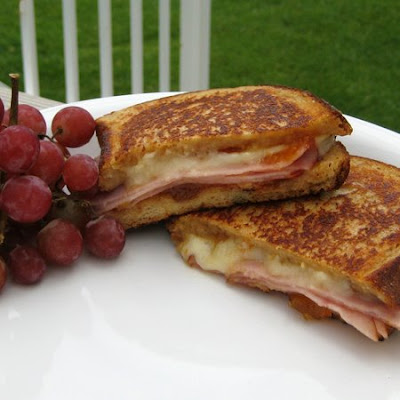 This is the original photo from when this recipe was first posted in June 2009.

This is a winner, and I do have all these ingredients on hand. Thanks for giving me a different way to make a non-traditional grilled cheese. I'll best this is excellent!

Such an amazing looking sandwich! I really want a bite of that… 🙂

Okay, you convinced me, I must try this yummy looking sandwich (plus, it gives me a good reason to buy some Brie).

This sounds SO good! Totally making it this week!

Looks so good! Yummy! Have you ever tried grilled cheese with jelly? I saw it made on Food Network and tried it the same day. Any combo of cheese and jelly works..its soooo good! I know it sounds weird..but it really is soooo good!

That looks delicious! My fancy grilled cheese sandwiches typically involve mozzarella and pesto. I will have to try brie, as it's my favorite cheese! 🙂

I love brie, but don't buy it that often which is probably good! Great sandwich!