I love having breakfast for dinner and this Hash Brown Quiche is one recipe I make quite often. It comes from The Essential Mormon Cookbook by Julie Badger Jensen. This book has a lot of down home type recipes.

Now, the way this turns out all depends on the type of hash browns you can find at your grocery store. There is an uncooked shredded hash brown that you can find in box. I have been having a hard time finding these lately. When I can find them, I have seen them in the Western Family brand (has 8 in a box) or the Ore-Ida brand (has 9 in a box). However, all I have been able to see at the store recently is those seasoned hash brown patties that already have a brown color to them. They look like the hash brown patties that you get at McDonald’s.

I prefer the uncooked shredded patties. They allow the egg mixture to seep into them so you get the egg and hash browns intermingled with each other. The McDonald type hash browns don’t allow the egg to mix with them and remain at the bottom like a tender potato crust.

Either way, it tastes delightful. Also, I have made this with both cream and skim milk. The cream definitely gives you that rich quiche flavor. It is still good with milk, just not as rich. You can even do half cream and half milk. I usually just go with the skim milk for less calories. 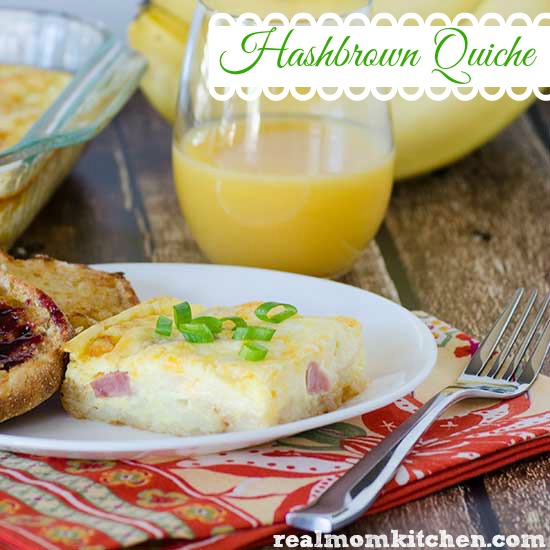 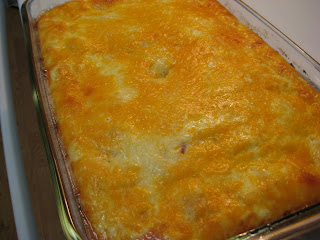 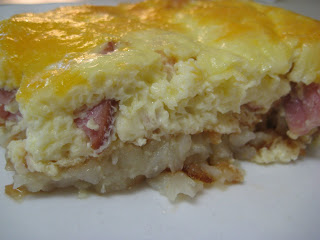 These are the original pictures from this post. The above picture was updated in March 2015.
6 comments
0
FacebookTwitterPinterestEmail

[…] Hash Brown Quiche – a yummy version of a quiche made with hash browns as the base. […]

Wow, this looks like a dish that I would just put on my lap and spoon it into my mouth until I couldn’t take anymore.

This sounds absolutely delicious!! I can’t wait to try it. I, too, like breakfast for dinner sometimes.

Laura this looks great! I love that cookbook!

I love your blog! I will be making this for sure!!