Today’s recipe is another one from Blogging, It’s What’s for dinner! It also happens to be from Janette. This recipe sounded interesting, Chicken Cordon Bleu in a pasta form. It also looked quick and simple. It’s definitely a keeper. The Monterrey Jack Cheese and sour cream gave this sauce the right degree of tanginess. I did have to add some milk to this sauce, it turned out quite thick. Instead of putting the sauce over the pasta, I just tossed all together before serving. Tomorrow I’ll share a great new recipe for bread that I served along with this. 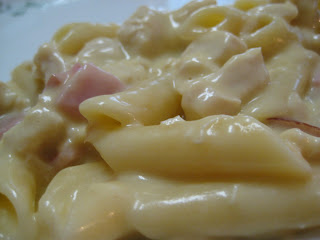 Chicken Cordon Bleu Pasta
2 cups cooked, diced chicken
6 oz deli ham, diced
2 cans cream of chicken soup
8 oz sour cream
2 cups shredded Monterrey Jack cheese
cooked pasta (I used a 16 oz box of penne)
milk (I need to add some to make the sauce the right consistency)
Combine all ingredients in a medium sauce pan until cheese is melted, smooth, and creamy. Serve over whatever pasta you like. I used penne and tossed the pasta and the sauce together. You can just spoon it over the past if you like.
** Canadian bacon would also be good, instead of deli ham
8 comments
0
FacebookTwitterPinterestEmail

This recipe sounds great & im going to try it for my sister’s birthday dinner.. the only thing im curious about is how many chicken breasts equaled one cup for you?

Delicious. This is going on my regular menu.

Wow, this is so right up my alley so I will have to wait until I cook it just for me. I am the ONLY one who loves a white cream sauce.

That sounds great! I love chicken cordon bleu, and this looks like a much easier preparation, with the same good taste! How awesome.

This sounds very good and it looks so creamy. I love chickne Cordon Bleu. I will let you know how it goes.