In my quest to discover new recipe to use over ripe bananas in, I found one that used them in a dough for banana cinnamon rolls with maple frosting. My kids love cinnamon rolls and I love the idea of the added nutrition of banana in the dough. The other bonus of this recipe is it doesn’t use yeast in the dough, it uses baking soda and baking powder. So these babies are ready in under an hour.

I was really surprised at the amount of banana flavor in these rolls even though it only calls for 1 banana. They also turn out wonderfully tender. Add in the maple frosting and you have the perfect combination. They taste like a banana bread cinnamon roll! 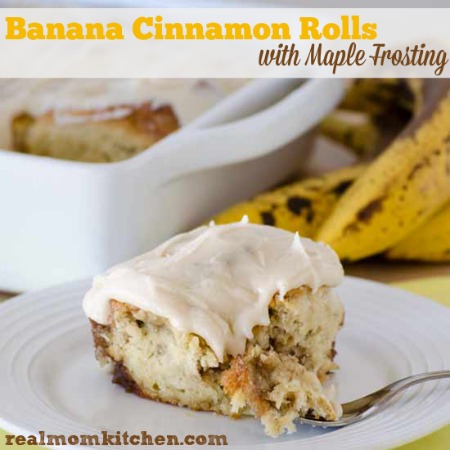 Are you sure that it’s 3 CUPS of powdered sugar for the icing? I put one cup and it was thick as cream cheese… maybe it should be 3 Tbsp? Also, in 18 min @ 425° my rolls were a little too brown and not sure how they taste yet. Anyway, yours look wayyyy better on the pics.

These look sooo tantalizing…I can’t believe they’re ready in under an hour! This is going to be a dangerous recipe to have in my arsenal, I can tell 😉

Aren’t these seriously the best? I am so glad you tried the recipe and loved them. Thanks for linking back 🙂