So for today’s recipe I used the cake mix banana bread and made banana bread french toast.  Yep, you can make French toast with banana bread.  I heard they make it at IHOP.  It is a little tricky since banana bread is so moist.
It helps to use banana bread that is a few days old and then you toast the slices before dipping them in the egg mixture.  I had to lay my toaster on it’s side to get the slices out.  You don’t want it falling apart on ya.  You want a slice that is about 1/2 inch thick too.
You also don’t need them to have too much of the egg mixture since the bread is so dense and moist.  You just want to give it a light coating.  You end up with slices of banana bread that taste almost like they have been deep fried.  It has a nice crisp and crunchy outside with the delicious dense moist texture inside that you would expect from a banana bread.
The loaf I used was very large, so the amount of slices need to make this may vary depending on the size of your banana bread loaf.  Top these fabulous French toast slices off with some maple syrup and some slice bananas if you want.  I personally just loved it with the syrup only.  Then if you want to go over the top with it like IHOP drizzle it with caramel sauce, some banana slices, and whipped cream.
For you locals, I am scheduled to appear tomorrow on KUTV’s Fresh Living that airs at 1 pm.  Check it out if you can. 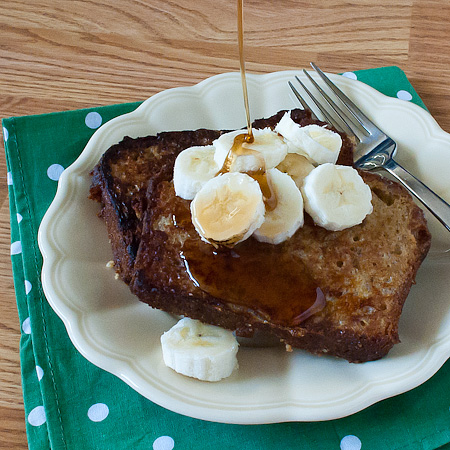 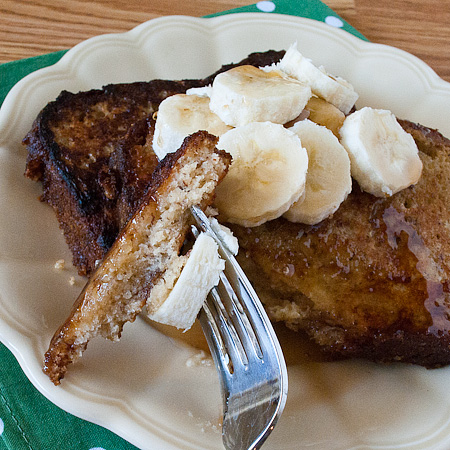 That sounds so good, I can’t wait to try it this weekend! Thank you for another great recipe 🙂