This week is breakfast week here at Real Mom Kitchen.  To start the week off we are beginning with “Waffles of Insane Greatness”.  So when I saw this recipe, I figured a waffle with this name is one I have to try.  I found it over at Annie’s Eats but from what I can tell the recipe originated from The Food Network.
So I must say, I have a favorite waffle recipe – tender sour cream waffles.  I make them in my Belgian waffle maker.  They are delish but they are definitely tender.  They don’t have that crisp outside.  The tender sour cream waffles also require you to separate the eggs and beat the whites.  So it does take a little effort to make them.
I must say that these “Waffles of Insane Greatness” are right up there on my list now with the tender sour cream waffles.  The beauty of these babies are they come together quickly.  No need to separate and beat egg whites here.  However, this recipe does require the batter to rest for 30 minutes.  Oh well – at least you can do other things while the batter rests.  Other plus – with these waffles is they have a nice and crispy outside with a soft inside.  I think the cornstarch is the secret to the crispy outside.
Only downside I found to this recipe is the waffle isn’t that sweet.  I served them up with some fresh strawberries that macerated in sugar while the batter sat.  Then I topped it all off with some sweetened whipped cream and the waffle still needed a little more sweetness.  However, this was easily solved with a drizzle of syrup.  Next time, I may up the sugar in the recipe to 3 Tbsp if I am serving them with fruit.  If you are serving them with regular old butter and syrup they are fine the way they are.
I doubled the recipe and was able to get 4 1/2 Belgian waffles which was fine, but next time I will triple the recipe to make sure their is plenty for my family of 5. 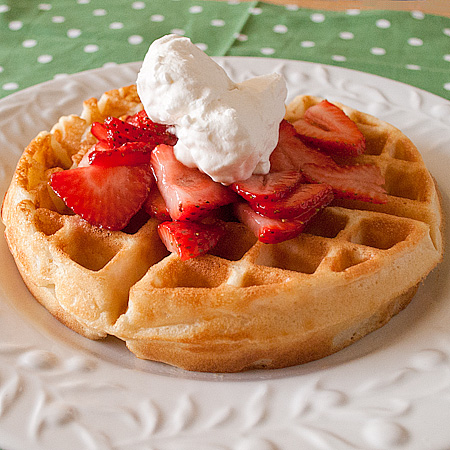 Waffles of Insane Greatness (I doubled these amounts, but will triple next time)

[…] Insane Greatness? Apparently it’s become like a waffle meme. So many bloggers have been-there-done-that (and that’s just the first page of Google!) According to everyone and their mom, this recipe […]

I’ve been looking for a really good, easy waffle recipe, Tried these for dinner tonight, this is it. Yummy! The batter was slightly runny,but still baked up well. My question is: if making these for a crowd, could they be made ahead and reheated in the oven?

Been looking for a good,easy waffle recipe. Tried this one tonight for dinner, yummy! The batter was slightly runny but still baked up well. My question is, if making these for a crowd, could they be made ahead and reheated in the oven? I’m thinking of having a breakfast dinner for a large group and these would be awesome!

[…] is the recipe for the photo that was used for the Spring Brunch Week image.  The recipe – waffles of insane greatness – and they do deserve the recipe title they were given!  I also have some great recipes for […]

[…] It has been fun this summer to try a few new breakfast recipes. I found this Waffle recipe over at Real Mom Kitchen. Laura mentioned that they weren’t very sweet, so I added a little sugar like she […]

We just made these for brunch — topped with raspberries. Yum, yum!

I’ve tried these but found that they expanded too much and squirted out the sides of my waffle iron and left the inside of the waffle empty. Anybody got a clue why?

You put too much batter in. I’ve been making these for 12 years now at my bed and breakfast inn. They only squirt when too much batter is put in. 3/4 cup is perfect for a regular belgian waffle maker. Also this recipe originated with Rachel Ray.

For realsies, we made these this morning for conference breakfast, I used mostly whole wheat flour, they really are the best waffles we’ve ever had. Love that exrta crunch. So good. This is my new stand by.

fluffy, light, delicious. they are calling my name!

bet they’re tasty with buttermilk in the batter 🙂

Your recipe sounds delicious. I guess I need to keep my eyes out for a waffle iron.

Okay, I really thought you were exaggerating with the name on this one. Then I made them for dinner tonight and realized you are maybe even understating it. My daughter thinks you should add “EPIC” to the title, and I concur. So yummy, and the light crisp is heaven.

Great pic! They look perfect! It makes we want to make some! 🙂

I’ve eaten the original Waffle of Insane Greatness at Aretha Frankenstein’s and it is fabulous! I need to make these at home soon!

Thanks for sharing! I’ve been looking for an easy waffle recipe. The recipe you have posted, do the measurements reflect that you doubled it or is it the original?

This sounds great. It is similar to the recipe I normally use, but I imagine the cornstarch really gives it some more crunch. I bookmarked this to try next time we have the waffle urge. Thanks for sharing!