Here’s a recipe that I came from a local TV show called Good Things Utah. These skillet enchiladas is a recipe that was from viewer Pat Warner. It is one of the few ways my family will eat corn tortillas, which I love. It is now a family favorite.

The other good thing, it only takes about 30 minutes to have these on your table. Just make sure you cook this in a big skillet. It begins by cooking come ground beef and onion in the skillet. Once it’s cooked, drain of any excess grease and mix in a can cream of mushroom soup, a can enchilada sauce, some milk and some canned green chilies. This mixture then simmers for 20 minutes.

Meanwhile, in another skillet, you will soften some corn tortillas by dipping them in hot oil for 3 seconds on each side or just until limp. Then set them to drain on paper towels. Once the tortillas drain, you roll up 1/4 cup cheese in each tortilla and place on top of beef mixture. Spoon some of mixture over the enchiladas and sprinkle with some cheese. Last is to cover and cook until heated through and cheese is melted. 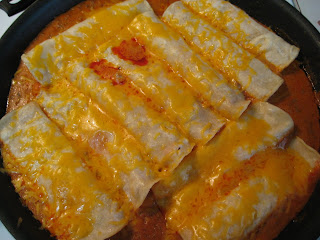 This is the original photo from this post. The above photo was updated in January 2016.

Looks good Laura! Now I need to get me a large skillet!

Oh yum, these are right up my alley. I love your blog, you’re providing a great little collection of recipes!

akssdjanAsdnsd – that’s me salivating over my keyboard. This is a must try! Thanks and have a great weekend!!!!