This weekend, I decided to try a recipe for pumpkin waffles with orange walnut butter that I found in my September/October 2008 issue of Simple and Delicious. My eight-year-old and eleven-year-old boys were not impressed. My 11 year old would not even touch them after his first bite. My 8 year old said he only liked the edges. I think they both let the “pumpkin” in the waffles ruin their taste buds for them before they even tried them.

My husband ate them but said he preferred plain old waffles. He tends to not be very adventurous when it comes to food. I kind of drive him nuts, when I try all these recipes. However, he isn’t complaining when it’s something he ends up liking. Now, my four-year-old daughter and I loved these. She ate two whole waffles herself.

I have to tell you, that the orange walnut butter is what put these waffles over the top for me. The whole combination of the pumpkin and cinnamon waffle followed with melty orange walnut butter and finished off with sweet maple syrup was absolutely divine. This seemed more like something you would find in an upscale restaurant. My husband did agree the orange butter was where it was at with these waffles. So take my word, you have to try this. However, there are no promises for picky eaters. 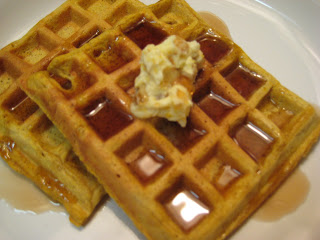 This is the original photo from this post. The above photo was updated in October 2013.

[…] flavor. The butter is amazing with it also. It just adds in even more fall flavor to it. I have a orange walnut butter I have shared before that would also be wonderful to serve this […]

[…] and home made maple syrup! Through none other than Pinterest I was able to stumble upon this gem. Click here for the recipe but let your mouth water and look at this waffle. You know you want to make it. […]

This looks exactly what I will be talking about in my next blog post. I’ll be sure to link to your page!

[…] family breakfast these waffles will work. They are definitely light and airy, more so than the other pumpkin waffle recipe I have shared before. They are also made best in a Belgian waffle maker. Another thing I love about […]

I made these this morning and I really enjoyed the waffles. I think my family is getting sick of my obsession with all things pumpkin, but i am not!

I made the butter with orange peel from a spice bottle and it did not taste orangey at all! It was just grainy butter. I wonder if I would have used fresh orange peel or orange juice or orange marmalade it would have turned out more flavorful? We didn't use the walnuts as nobody in my family really likes them.

Anyway, the waffles were good with just regular butter and maple syrup.

Oh My God!! These sound sooooo good!! I am going to make these soon!! Thanks for sharing that.

Laura I can totally relate! My hub is not always a huge fan of some of teh things I try out either. But it is fun to venture out a bit, you never know when you will get a hit!

Wow, I love how everyone is coming up with pumpkin stuff. Yum! I am posting something pumpkin this week too 🙂 Have a great day.

These sound really good, and a good way to use up my leftover pumpkin from the pumpkin chocolate chip cookies I made over the weekend. Thanks for all the great recipes!

Laura,
Your waffles sound perfect for fall. I’ve got try these!