Melanie made a few changes to the original recipe. Her recipe is exactly the way I would have changed it. For one, there is no Tabasco sauce. Then Melanie added mozzarella cheese to the sandwich. This was really yummy.

The meat used in this sandwich is cube steak. My husband, who never likes anything I make with cube steak in it, actually liked the sandwich. I do keep the onions separate when I make this because not everyone loves onions in my family. This is fine for me because that just means even more onions for my sandwich.

I made my homemade bun recipe to put these on the very first time I made this sandwich. It was delicious on the homemade bun. However, a store bought bun make things easier and is still delicious. This Man-Pleasin’ Sandwich was a fairly simple and delicious sandwich recipe. YUM! 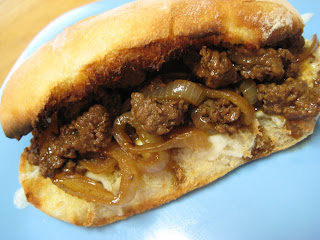 This is the original photo from this post when it was first posted in August 2008.

Well, I tried this recipe this evening and it was a hit. It was absolutely delicious and everyone loved it, including my kids. I made the sandwich and paired it with the potato slabs you have in another recipe. All of it was super yummy!! So thanks for a new recipes we’ll be making often. 🙂

Laura – seeing this on your blog makes me realize I have only made it once and I would love to make it again! Your picture looks great, by the way. I’m glad your husband liked it.

This is something my husband would love!! And homemade buns!! You are the best! 🙂

This recipe looks so good! I’d be a happy girl with a nice one of these for lunch!