Who doesn’t love s’mores? Here’s a recipe for indoor s’mores. You can make these indoors and they are less messy to eat than the original.

The recipe came from off a box of Golden Grahams. I followed the stove top directions. This is definitely a kid pleaser.
These are best if you eat them the same day. The cereal tends to get soft the next day.

This is basically about the same as making a recipe of rice krispie treats. You add some golden graham cereal into a large bowl. Then in a microwave safe bowl, you’ll add some marshmallows, chocolate chips, corn syrup, and butter. You melt that together in the microwave and then mix in some vanilla.

Next, you pour the melted mixture over the Golden Graham cereal. Quickly toss until the cereal is coated with the mixture. Then mix in a cup of miniature marshmallows. Then and the mixture to a buttered 9 x 13 inch pan and press into the pan. Allow to cool and cut into squares. 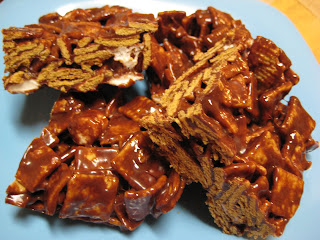 This is the original photo from this post. The above photo was updated in August 2015.

[…] S’mores Pops from Butter with a Side of Bread S’more Cookies from Jamie Cooks It Up! Indoor S’mores from Real Mom Kitchen S’more Cupcakes from Cupcake Diaries S’more Ice Cream from Ashlee […]

oh this is one of my favorite recipes ever!!!

I make something similar called simple s'mores bars but with only the cereal, butter, marshmallows & chocolate.
~ingrid