From the time I married my husband, I found out that he does not like spaghetti.  I made the recipe my mom makes for him and he would eat it (because it has bacon in it) but it still wasn’t a meal he would ask for. I recently decided to try this creamy skillet spaghetti recipe on him and see if after 19 years of marriage he would finally like spaghetti.

The recipe is made with both ground beef and italian sausage. It also includes 2 kinds of cheeses along with a little heavy cream. I figured you can’t loose if it has cheese and cream in it, right? Well, I hit a home run with this one. The whole family loved it.

Two things I have learned with making spaghetti for my husband is thin spaghetti is always better and you need to break the noodles in half before cooking them. He is definitely more likely to eat it if those 2 requirements are met. I did both on this recipe. A tomato/cream base sauce is always another good way to get him to like a dish.

This recipe will also work well for summer since it is made on the stove top and all in one pan. You do need to put it in the oven for a few minutes on broil just to melt the cheese.  You can skip this, but it is a step that is well worth doing! 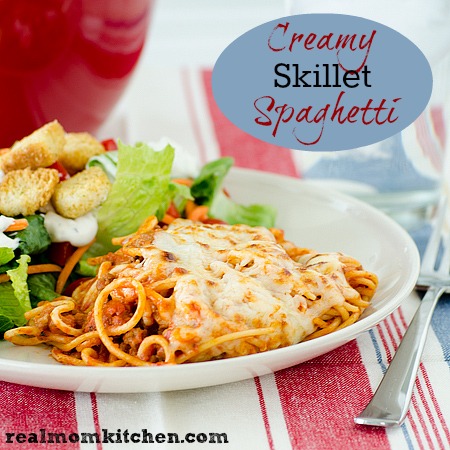 Recipe adapted from Kaitlin in the Kitchen.

My husband said this was one of the tastiest things he’s ever eaten. He had 3 helpings! I followed the recipe except for using all sausage instead of half ground beef. It was delicious.

I agree thin spaghetti is the only way to go and it’s better if broken in half! This looks amazing. I will make it soon.

Haha! My guy will also only eat spaghetti if it is made with thin spaghetti or angel hair pasta!

Laura, This pasta looks delicious. I could devour this 🙂 Seconds please?!

Can I just say I love your blog. Your recipes are easy and yummy—Thanks so very much