Today I have another French toast recipe for ya.  This one you make with yummy cinnamon bread.  I used a loaf of cinnamon burst bread from Great Harvest Bread store.  I know you all don’t have a Great Harvest near you, so you can use whatever cinnamon bread you can get your hands on.  However, I must say it rocks with the cinnamon burst bread from Great Harvest.  It is also best if you can score a loaf from the day old section there!
You want to slice the bread into some nice thick slices.  You’ll want them around 1/2 inch thick.  Now the Great Harvest Cinnamon Burst bread is made into a round loaf.  So with those really big slices from the center of the loaf, I cut them in half to make them easier to dip in the egg mixture.  You also need to cook this French toast just below medium heat because the sweet cinnamon parts of the bread and burn if the heat gets to high.
I made the egg batter for the French toast the way my mom makes it.  The secret ingredient is some sugar.  Then, I really like this french toast topped with some fresh banana slices.  It really goes well with the cinnamon.  It’s just heavenly! 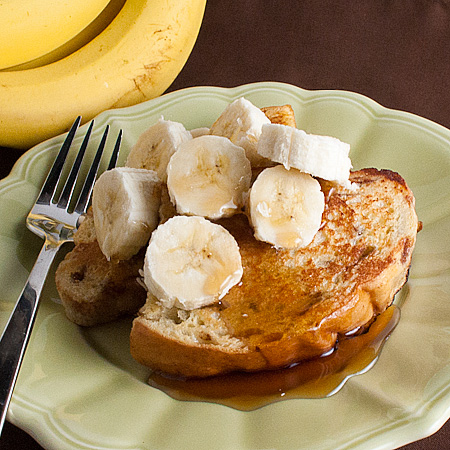 We always eat half of the loaf before getting home. Any idea of how to cut this recipe to just 3 or 4 slices? 🙂

I love to get the Cinnamon Chip Bread to make french toast with. The recipe for the batter I got on the Food Network. Most of the time I will get 2 loaves make it then freeze it. I cut waxed paper to put between the slices so they do not stick together. It is so yummy it does not last long. I am going to get some of the bread to take to my in-laws as they do not have a Great Harvest near them.

Thanks so much for the plug. My husband and I own the Great Harvest in Logan and it is so fun to have someone rave about our stuff. I will admit that french toast with Cinnamon Burst is our family favorite too. Delicious! Let me know where you are and I’ll see if I can score you a free loaf or two of our Great Harvest Bread. I’d love to see you in Logan, but if you’re farther away I can still get you a free loaf! Thanks and fun blog!

I have heard of making french toast with cinnamon bread before but I have never tried it! I definitely need to get my hands on some cinnamon bread soon!

I love Great Harvest! Too expensive for me to indulge in very often, but I love it anyway:)

Oh this looks fantastic! It’s been far too long since I’ve made french toast!