There is a tasty little bakery called Nothing Bundt Cakes that makes the most amazing bundt cakes. The thing that makes their cakes so divine is they are amazingly moist! Also, they make smaller versions of their bundt cakes called bundtlets and bundtinis. I decided to make an at home version of their cake for Valentine’s and make them the bundetlet size. These Chocolate Chocolate Chip Bundlets are just the right size to give away.

I made them using this Wilton mini bundt pan. The recipe makes 2 dozen. It is best to use 2 pans to make these. You can get by with using one, but the second batch of cakes with be puffer and won’t be as uniform as the first batch.

This recipe turns out nice and moist like Nothing Bundt Cakes bundlets, but the crumb is not exactly the same. Still, it is a pretty close version that can be made at home for less money.

Also, you can give them in cupcake boxes. You just want to get one with a removable insert, since you won’t need it. I found these cute polka dot ones on amazon that cost less than 50 cents each. I found them in both red and pink. Also, I flattened out some Valentine print cupcake liners to place the cakes on. I used 2 per cake. I put 2 together with the printed sides facing out. This way you see the cute print from the side and top when looking at the cakes.

This recipe can be used to make a full bundt cake too. As a result, I have included instructions on how to do that in the notes of the recipe.  You can even change the cake mix and pudding mix in the recipe to make the other versions of their bundt cakes like lemon or red velvet. Obviously, just leave the chocolate chips out for the lemon version. 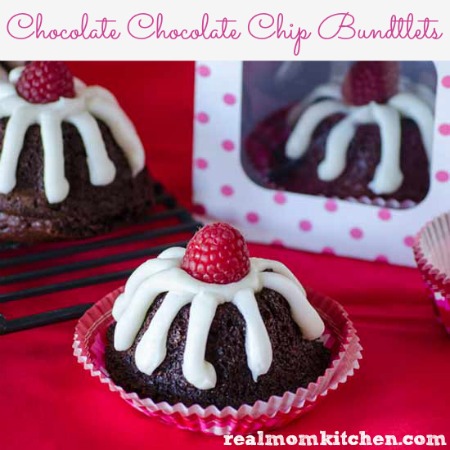 If making a full sized bundt – grease and flour you bundt pan or use the Baking for of non-stick spray. This spray has flour in it. Bake for 45-50 minutes and allow to cool in pan for 10 minutes before inverting.