A while ago I was hunting for a recipe to use up some leftover ham. I found this recipe for Cheddar Ham Soup on the Taste of Home website. It was in a issue of their Simple and Delicious magazine.

Since I get that magazine, I’m not sure how I missed this recipe. It is a simple soup to make, and doesn’t require a lot of time. It’s ready in 30 minutes. You’ll love this creamy, cheesy soup.

It begins in a large saucepan. Combine the potatoes, water, carrot and onion in the pan and bring to a boil. Then cook at a simmer for 10-15 minutes or until the veggies are tender.

Meanwhile, in another saucepan, melt some butter and stir in flour until smooth. Gradually add in come milk along with salt and pepper. You will bring this to a boil. Then cook and stir for 2 minutes or until thickened. Stir in the shredded chaddar cheese until melted. Add this mixture to the undrained potato mixture along with the ham and peas. Just heat through and it’s ready. 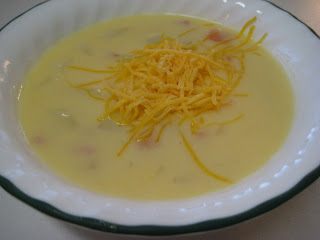 This is the original photo for the post. The above picture was updated in Jan 2016.

I love soup! This looks great…I will be making this one.

I love creamy, cheesy soups. Too bad I am the only one in the house who does!!!