Last week on Good Things Utah, a local television show, they had “T” on from Q4U. Q4U is a bbq restaurant that’s in Taylorsville. I think they were originally located in West Valley. Anyway, I haven’t eaten there, but I hear it’s good. And “T” has competed in many bbq contests and won. So I knew this sauce had to be good, plus the idea of an applesauce bbq sauce really got my interest.

After seeing this recipe I knew I had to try it with some pork. Apples and pork go so well together. Also, I liked that the sauce incorporated cinnamon in it to. I had a nice 3.75 pound pork loin in my freezer I decided to use. I cooked the pork loin in my slow cooker for 8 hours, shredded it, and added this sauce. The sauce is quite runny in comparision to bottled sauces, but after mixing it in with all the pork, the meat really soaked it up and absorbed most of it so it wasn’t runny.

The recipe for the sauce would probably be perfect for 3 pounds of pork, I would have liked it a little more saucy.

Let me tell you, the flavor of the sauce is heavenly. You get the apple taste along with the sweetness of the brown sugar, a slight tang from the lemon juice, and the spicy warmth from the cinnamon. It is the perfect sauce to bring in some of those Fall flavors.

I must say I am really in the mood for Fall. If you can’t tell it’s my favorite season. I served this applesauce bbq sauce shredded pork on rolls, but it would also be fabulous by itself. You could also serve it over slices of a pork loin too. Yummy! We loved this! Since I did such a large pork loin I have leftovers, even better. 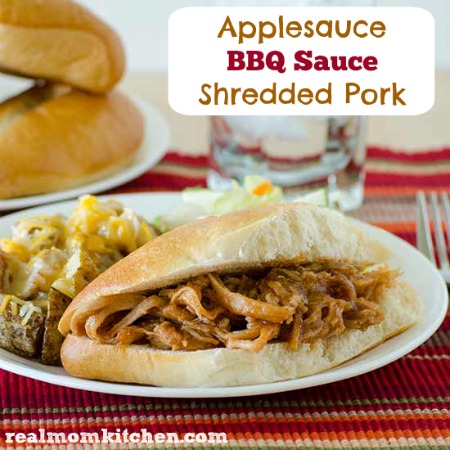 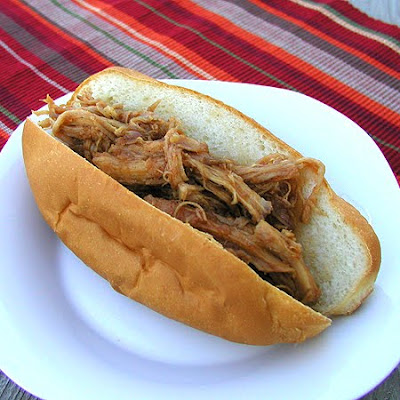 This is the original photo from this post. The above photo was updated in September 2014.

This is SO good! The only change I make is to cover the pork in applesauce while it’s cooking. We’ve made this a few times – it’s great! I can put it up when I leave for work in the AM, and have one of the kids make the sauce when they get home around 4. Then they add the sauce and shred the pork and it’s all ready for dinnertime at 6PM. This recipe is so good, that when pork loin goes on sale, we stock up so that we can make this recipe anytime. Love that it’s all easy ingredients that we normally have in the house!

Yummy! I made this recipe tonight for dinner and it was delish! I did cook the pork in some apple juice and cut down the brown sugar to 1 1/2 cups. Thanks for sharing!

I use this sauce on baby back ribs. Cook ribs @ 225 degrees for 4 hours then baste with sauce and bbq. delish.

Woohoo! Yummy! Tender and sweet and delicious. I only used about 1 1/4 cups of brown sugar. I think it would have been way too sweet with more than that. I'll have to make this for the next potluck my husband has at work..golly knows all of those soldiers would gobble it up!

I've got a pork roast in the crockpot right now. I did add some apple juice to it because I had it and thought I'd see how it turns out. I'll come back later and let you know.

This sounds great! I found your blog via "Hostess with the Mostess" where I'm featured as well. It's wonderful! We eat pulled pork on a sweet potato biscuit which is also fabulous. I'll give this recipe a try the next time we eat this for dinner.

Sounds easy and that photo is making me hungry!

That sounds so good 🙂

I had planned on doing shredded pork for dinner tonight but I forgot to put it in the crockpot before work… maybe tomorrow. Yum!

Applesauce and pork are such a classic combination. This must be delicious! And cinnamon….yum!

Oh I have been on the look out for a shredded pork recipe, you must have read my mind. lol This sounds perfect!!

I am printing this out right now. It sounds perfect for a cool fall day. The flavors do go perfect together.